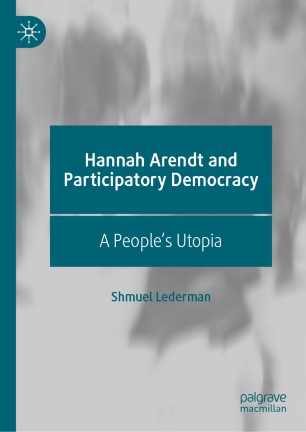 This book centers on a relatively neglected theme in the scholarly literature on Hannah Arendt's political thought: her support for a new form of government in which citizen councils would replace contemporary representative democracy and allow citizens to participate directly in decision-making in the public sphere.

The main argument of the book is that the council system, or more broadly the vision of participatory democracy was far more important to Arendt than is commonly understood. Seeking to demonstrate the close links between the council system Arendt advocated and other major themes in her work, the book focuses particularly on her critique of the nation-state and her call for a new international order in which human dignity and “the right to have rights” will be guaranteed; her conception of “the political” and the conditions that can make this experience possible; the relationship between philosophy and politics; and the challenge of political judgement in the modern world.

Dr. Shmuel Lederman is a teaching fellow in the Department of History, Philosophy and Judaic Studies at The Open University of Israel, and in the Weiss-Livnat International MA Program at the University of Haifa, Israel. He has published extensively on the political thought of Hannah Arendt in prominent journals in political theory as well as in genocide studies. This is his first book.