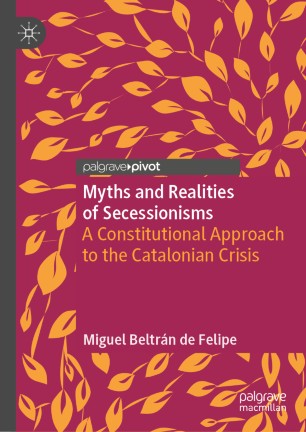 Myths and Realities of Secessionisms

A Constitutional Approach to the Catalonian Crisis

‘When it comes to the Catalonia question any three persons will have four different views. This volume, slim in size but rich in content, soberly helps navigate the critical legal issues underlying the dispute.’

‘Miguel Beltrán de Felipe explains critically but unprejudicedly the evolution of the Catalan secessionist movement, and the constitutional problems it has raised in recent years. He discusses the normative issues with honesty and objectivity, and sheds light on them through the lenses of comparative constitutional law.’

‘Secession has become a worldwide issue. This book captures the essence of the Catalonian secessionist process and analyses its constitutional, international and comparative aspects in light of current myths on the nation and on sovereignty. This work deserves a place of honour in the contemporary debate on the State, from both the national and the global point of view.’

– Sabino Cassese, Emeritus Justice of the Italian Constitutional Court, and Emeritus Professor of the Scuola Normale Superiore of Pisa, Italy

‘Beltrán de Felipe has produced both a clear and fluent account of the struggle between Catalonia and the Spanish state on the issue of independence, and a deeply thoughtful reflection on what he sees as fundamental flaws in the actions both of the Catalan independence movement and the government in Madrid.’

‘Identity, secession and democracy. This is the complex background of this book which offers a balanced vision of the territorial conflict initiated by Catalonian secessionists in democratic Spain. A succinct but comprehensive, intense essay on the limits of law and politics.’

This book provides a comprehensive overview of the Catalonian crisis in Spain from a historical, political and legal perspective. Using the precedents of Québec and Scotland, the author highlights some of the key issues of secessionist nationalism relating to sovereignty, referenda, democracy and constitutional amendments.

Miguel Beltrán de Felipe is is Professor of Law at the University of Castilla-La Mancha, Spain. He previously served as a law clerk in the Constitutional Court of Spain, and as counsel for the Secretary of State for Parliamentary Affairs, Spain."