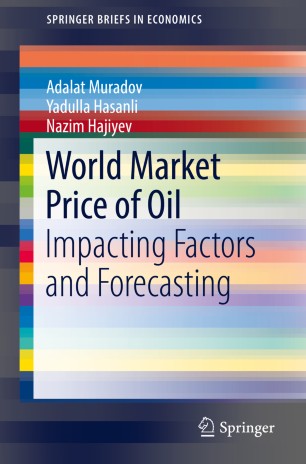 This book develops new econometric models to analyze and forecast the world market price of oil. The authors construct ARIMA and Trend models to forecast oil prices, taking into consideration outside factors such as political turmoil and solar activity on the price of oil. Incorporating historical and contemporary market trends, the authors are able to make medium and long-term forecasting results. In the first chapter, the authors perform a broad spectrum analysis of the theoretical and methodological challenges of oil price forecasting. In the second chapter, the authors build and test the econometric models needed for the forecasts. The final chapter of the text brings together the conclusions they reached through applying the models to their research. This book will be useful to students in economics, particularly those in upper-level courses on forecasting and econometrics as well as to politicians and policy makers in oil-producing countries, oil importing countries, and relevant international organizations.

Dr. Nazim Ozbey Hajiyev studied at the Baku branch of the Leningrad Financial Economics Institute (currently, called Azerbaijan State University of Economics) between 1986 and 1990. He received PhD in Economics in 2000, and an Associate Professor in 2014 with the decision of the Higher Attestation Commission under the President of the Republic of Azerbaijan. He was a winner of the countrywide Olympic on mathematics in 1980. He has a monograph and he is a co-author of 2 textbooks for higher education. He is a responsible for executing 12 research works, more than 10 international and local grant projects (coordinator and expert) and an author more than 90 scientific articles (including 25 in foreign countries). He participated as a guest speaker at more than 20 international and local conferences. He has been an author of the draft of  “Competition Code" of the Republic of Azerbaijan. His research has been supported by DAAD, USAID, UNDP, East West Management Institute (EWMI) in New York and Science Fund of Azerbaijan Republic. He was the post graduate student in the Center of Economic Reforms between 1993 and 1996, worked at the Ministry of Education between 1990 and 1992. He was a researcher, a leading researcher and a head of the department in the Center of Economic Reforms (Institute for Scientific Research on Economic Reforms at present) under the Ministry of Economic Development (Ministry of Economy at present). He worked at Department of Antimonopoly Policy (The State Service for Antimonopoly Policy and Consumer Rights Protection) under the Ministry of Economy between 1996 and 2003. Since 2015 he has delivered lectures on “The Economics of Oil and Gas Resources” and “Project Management of Oil and Gas” in Greece and on Economics, Managerial Economics, International Management in the framework of UNEC and University of Business and International Studies (UBIS in Geneva, Switzerland) Dual Degree Graduate Program.  He is a managing editor of the Journal of Economic Sciences: Theory and Practice and Scientific Reviews at UNEC and he also serves as an editorial board member of Journal of Global Economy Review (Kozani, Greece). Since 2014 he has been the director of UNEC Business School, and he has been an Associate Professor of  the Department of Economics and Business Administration since 2017. He was a visiting scholar at the Davis Center for Russian and Eurasian Studies at Harvard University during 2017-2018 period. His project was “Hydrocarbon Resources (oil and gas) in the Global Market and their Perspectives”. The major fields of his current research interest are applied economic issues, competition policy, socio-economic modeling, macroeconomic policy, macroeconomic forecasting, oil and gas prices forecasting.