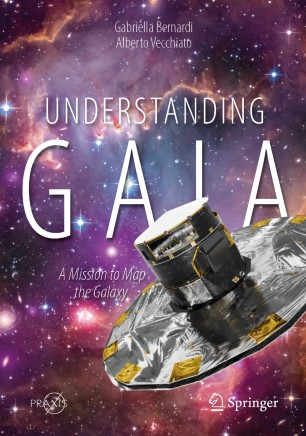 A Mission to Map the Galaxy

This book is the first to provide a comprehensive, readily understandable report on the European Space Agency’s Gaia mission that will meet the needs of a general audience. It takes the reader on an exciting journey of discovery, explaining how such a scientific satellite is made, presenting the scientific results available from Gaia to date, and examining how the collected data will be used and their likely scientific consequences.

The Gaia mission will provide a complete and high-precision map of the positions, distances, and motions of the stars in our galaxy. It will revolutionize our knowledge on the origin and evolution of the Milky Way, on the effects of mysterious dark matter, and on the birth and evolution of stars and extrasolar planets. The Gaia satellite was launched in December 2013 and has a foreseen operational lifetime of five to six years, culminating in a final stellar catalogue in the early 2020s. This book will appeal to all who have an interest in the mission and the profound impact that it will have on astronomy.

Gabriella Bernardi holds a degree in Physics and a Master’s degree in Scientific Communication. After having worked at Alenia Spazio in Turin (Rosetta mission), she decided to devote all of her time to science, and especially astronomy. She is currently a freelance journalist for magazines and periodicals and was also involved in the Planetarium and Museum of Astronomy and Space in Pino Torinese. She has won an Italian award for popular science journalism. She is the author of three books aimed at popularizing astronomy among children and young people and of The Unforgotten Sisters – Female Astronomers and Scientists before Caroline Herschel, published by Springer. She has also written a biography of the astronomer Giovanni Cassini, which will be released soon, again by Springer.

Alberto Vecchiato is an astrophysicist who holds a degree in Physics and a PhD in Space Science and Technology. He has worked at the Astrophysical Observatory of Turin, Italy, since 2001, where his main activity has always been on the ESA Gaia mission, in particular in the fields of reconstruction of the astrometric sphere and testing of General Relativity. His professional interests also include High-Performance Computing, Archeoastronomy, and Education. He has published more than 80 scientific works and several popular science papers.