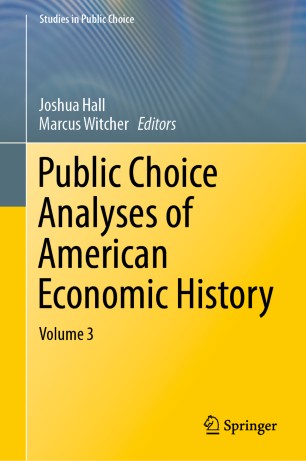 This book is the third installment in a series of volumes looking at episodes in American economic history from a public choice perspective. Each chapter discusses citizens, special interests, and government officials responding to economic incentives in both markets and politics. In doing so, the book provides fresh insights into important periods of American history, from the Rhode Island’s 1788 Referendum on the U.S. Constitution and the political influence of women’s clubs in the United States. The volume features economic historians such as Ruth Wallis Herndon, junior public choice scholars such as Jayme Lemke and Leo Krasnozhon, and political scientists such as Michael Faber. This volume will be useful for researchers and students interested in economics, history, political science, economic history, public choice, and political economy.

Joshua C. Hall is an associate professor of economics at West Virginia University and Director of the Center for Free Enterprise within the College of Business and Economics. He earned his bachelor and master degrees in economics from Ohio University and his Ph.D. from West Virginia University in 2007. Prior to returning to his alma mater, he was the Elbert H. Neese, Jr. Professor of Economics at Beloit College and an Economist with the Joint Economic Committee of the U.S. Congress. Hall is a past President of the Association of Private Enterprise Education. In addition to being a co-author on the widely-cited Economic Freedom of the World annual report, he is author of over 100 academic journal articles.

Marcus M. Witcher is a postdoctoral professor of history at West Virginia University. He earned his bachelor degree in history with a minor in economics from the University of Central Arkansas. He then received his masters and PhD in history from the University of Alabama. Marcus is currently revising his book manuscript Getting Right with Reagan: Conservatives and the Fortieth President, 1980-2016. He has published four peer-reviewed articles, six book reviews, and has presented his work at over ten academic conferences