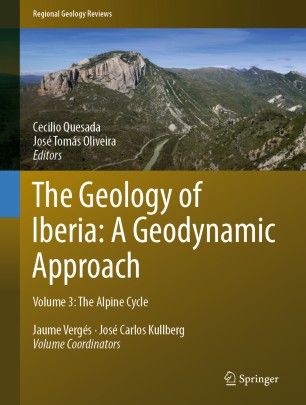 The Geology of Iberia: A Geodynamic Approach

Taking a new global approach, this unique book provides an updated review of the geology of Iberia and its continental margins from a geodynamic perspective. Owing to its location close to successive plate margins, Iberia has played a pivotal role in the geodynamic evolution of the Gondwanan, Rheic, Pangea, Tethys s.l. and Eurasian plates over the last 600 Ma of Earth's history. The geological record starts with the amalgamation of Gondwana in the Neoproterozoic succeeded by the rifting and spreading of the Rheic ocean; its demise, which led to the amalgamation of Pangea in the late Paleozoic; the rifting and spreading of several arms of the Neotethys ocean in the Mesozoic Era and their ongoing closure, which was responsible for the Alpine orogeny. The significant advances in the last 20 years have attracted international research interest in the geology of the Iberian Peninsula.

This volume presents the most comprehensive, and updated description of the Alpine cycle in Iberia. This volume focuses in the different geological events during the Alpine orogeny as well as the lithological succession . This book is of interest not only for scientists of Portugal and Spain but also for geoscientists searching for analogies for oil and gas as well as tourists visiting the main mountain ridges of Iberia such as the Pyrenees.

Cecilio Quesada’s professional career was based at Instituto Geológico Minero de España (Spanish Geological Survey), until he retired from there in 2013. He is currently an Honorary Professor at the Faculty of Geological Sciences, Universidad Complutense, Madrid, where he also served temporarily as an Associate Professor. As a “survey person”, his research interests, past and present, include geological mapping, regional geology, tectonics and geochronology, mainly focused on the Variscan orogen in its global context. He has participated in ten IGCP projects since 1979, and is currently involved in Project 648: Supercontinent cycles & Global Geodynamics.

José Tomás Oliveira holds a Ph.D. and Agregação (Portuguese postdoctoral degree). He is a geologist and is currently collaborating at Laboratorio Nacional de Energia e Geologia, former Geological Survey of Portugal, where he acted also as Head of the Geology and Mineral Resources departments. As a survey geologist, his main activities have focused on regional geological mapping in Portugal and Mozambique, with a particular interest in stratigraphy, clastic sedimentology and basin analysis. He has been an Invited Professor at universities in Portugal and Angola, author and editor of several geological maps, and was co-editor of the recently published Geological Map of Portugal and Spain, 2015, scale 1:1,000,000.