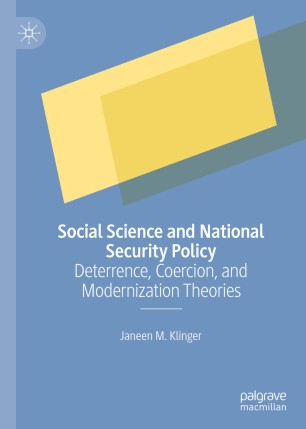 This book examines how deterrence, coercion and modernization theory has informed U.S. policy, addressing why former Defense Secretary Robert McNamara’s famous description of the Vietnam War as the “social scientist’s war” is so accurate. By tracing the evolution of ties between social scientists and the government beginning in World War I and continuing through the Second World War and the early Cold War, the narrative highlights the role of institutions like the RAND Corporation, the Social Science Research Council and MIT’s Center for International Studies that facilitate these ties while providing a home for the development of theory. The author compares and contrasts the ideas of Bernard Brodie, Herman Kahn, Albert Wohlstetter, Thomas Schelling, Gabriel Almond, Lucian Pye and Walt Rostow, among others, and offers a cautionary tale concerning the difficulties and problems encountered when applying social science theory to national security policy.

“This book is a well-conceived and careful examination of a subject that matters much to anyone interested in how national strategy is made. Janeen Klinger has a mind that is both original and disciplined—just the guide one needs for an intellectual journey such as this book proffers.” (Christopher C. Harmon, Bren Chair of Great Power Competition, Marine Corps University, USA)

“As Janeen Klinger points out in her incisive analysis, social science theory has cast a long shadow on the use of American military power and nation-building efforts since the end of World War II. However, in her thorough assessment lies a cautionary tale: U.S. policymakers should be wary of finding comfort in the promise of scientific certainty or a guarantee of policy success. The wars in Iraq and Afghanistan serve as the most recent reminders of these pitfalls.” (Frank Leith Jones, Professor of Security Studies, Department of National Security and Strategy, U.S. Army War College, USA)