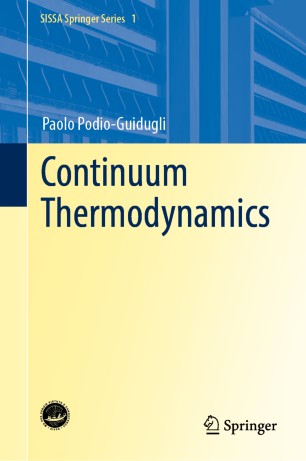 This book deals with an important topic in rational continuum physics, thermodynamics.Although slim, it is fairly well self-contained; some basic notions in continuum mechanics, which a well-intentioned reader should but may not be familiar with, are collected in a final appendix.

Modern continuum thermodynamics is a field theory devised to handle a large class of processes that typically are neither spatially homogeneous nor sequences of equilibrium states. The most basic chapter addresses the continuum theory of heat conduction, in which the constitutive laws furnish a mathematical characterization of the macroscopic manifestations of those fluctuations in position and velocity of the microscopic matter constituents that statistical thermodynamics considers collectively. In addition to a nonstandard exposition of the conceptual steps leading to the classical heat equation, the crucial assumption that energy and entropy inflows should be proportional is discussed and a hyperbolic version of that prototypical parabolic PDE is presented. Thermomechanics comes next, a slightly more complex paradigmatic example of a field theory where microscopic and macroscopic manifestations of motion become intertwined. Finally, a virtual power format for thermomechanics is proposed, whose formulation requires that temperature is regarded formally as the time derivative of thermal displacement. It is shown that this format permits an alternative formulation of the theory of heat conduction, and a physical interpretation of the notion of thermal displacement is given.