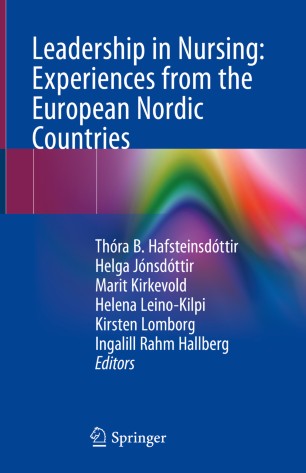 Leadership in Nursing: Experiences from the European Nordic Countries

This book explores the leading role played by nursing science in the European Nordic countries. Recognized leaders in nursing research from Denmark, Finland, Iceland, Norway and Sweden, reflect on the leadership of nurses, the societal developments and the state of nursing science in their country, and the successes and remaining challenges nurses are facing. The book highlights representative leadership projects focusing on e.g. evidenced-based clinical practice, education and research that have impacted patient and healthcare outcomes in each country.
The book shows how nursing, as a scientific discipline, has been developing rapidly in these five Nordic countries. They have more nurses per capita than other countries (OECD 2016) and healthcare is provided to all citizens. Moreover, nursing qualification in the Nordic countries was based on university education early on, and there are more professors of nursing than in other countries. Accordingly, this book on Leadership in nursing within the Nordic countries shares essential and pioneering expertise that will benefit nurses and nurse scientists around the globe.

Dr. Thóra B. Hafsteinsdóttir, RN, PhD, is a professor of nursing at the Faculty of Nursing, University of Iceland and a senior researcher at the Department of Nursing Science, Julius Center, University Medical Center Utrecht, and Department of Health care at the University of Applied Sciences, Utrecht the Netherlands. Since 2014 she is a director of the Board of Directors of Sigma Theta Tau International, honor society of nursing international. Dr. Hafsteinsdóttir received her BSc degree in 1984 from University of Iceland, her MSc in 1994 from University of Wales and her PhD in 2003 from University of Utrecht. Her research has focused on nursing rehabilitation of patients with stroke and on leadership research, PhD education and leadership development of nurses. She chairs the Dutch Leadership Mentoring in Nursing Research for postdoctoral nurses and the Nursing Leadership Educational Program for Doctoral Nursing Students and Postdoctoral Nurses in Europe, the Nurse-Lead project, a collaboration between seven partners in six European countries which include Iceland, Netherlands, Finland, Germany, Lithuania and Portugal. Dr. Hafsteinsdóttir serves on numerous national and international committees. She gives lectures nationally and internationally. Her recent research received funding from the Research Fund of the University of Iceland, NordForsk, the Nordic Economic and Social Research Council, The Netherlands Organisation for Health Research and Development, ZonMw and the Erasmus + Programme.

Dr. Kirsten Lomborg, RN, MScN, PhD is a professor at Department of Clinical Medicine, Aarhus University and from 2018 partly employed at Steno Diabetes Center Copenhagen, Denmark. She received her registered nursing certificate in 1980 and has continued to qualify for the highest level of education in nursing science combined with several supplementary educations in didactics, leadership, and research management. From 2007 to 2012 Kirsten Lomborg was the head of Section for Nursing at Aarhus University, Denmark. Throughout her career, she has strived for the connection between nursing theory and practice and close collaboration between clinical practice, education, research and management. In 2013 she was appointed professorship with special responsibility in patient involvement. This responsibility has since been her driving force and has resulted in several national contributions and international publications along with the establishment and lead of the Research Programme in Patient Involvement at Aarhus University Hospital, Denmark. Her research interests include person-centred care, shared decision-making, self-management support, and personal care planning, often combined with new technical and structural solutions where patient-reported outcome measures form an important element of developing value-based healthcare that works on the users' premises.
Dr. Helena Leino-Kilpi, RN, PhD is a professor and chair, Head of the Department of Nursing Science, University of Turku, Faculty of Medicine, and Nurse director (part-time) in Turku University Hospital in Finland. She is nationally and internationally well-known expert in the field of nursing and health sciences, a registered nurse with clinical expertise in surgical-intensive nursing care, MEd and PhD in nursing science. Main teaching area of Helena Leino-Kilpi is health care and nursing ethics.  She has supervised more than 50 graduated PhDs in nursing science, has been chairing years the Finnish National Doctoral Network in Nursing Science, taught research ethics in the European Academy of Nursing Science and is a member of the management board of the Baltic Sea Region Doctoral Network. Her research is in three main areas, in health care and nursing ethics, clinical nursing and health care education.  Her research is strongly international and she has published around 500 scientific, referee-based publications. She has several international and national academic duties, is Honorary Doctor in the University of Klaipeda, (Lithuania), and a Fellow of European Academy of Nursing Science
Dr. Helga Jonsdottir, RN, PhD, FAAN, is a Professor at the Faculty of Nursing, School of Health Sciences, University of Iceland and holds a joint position as an academic chair of nursing care for chronically ill adults at Landspitali University Hospital Reykjavik Iceland. She received her baccalaureate degree in nursing from the University of Iceland in 1981 and a master’s degree in nursing in 1988 from the University of Minnesota in the USA. In 1995 she defended her doctoral thesis in nursing from the same school. Jonsdottir’s research has focused on developing partnership-based nursing care for chronically ill patients and their families. Along with practice development, assessment of complex health problems, e.g. hemispatial neglect, has recently become prominent in her research. The translation of science through academic-practice partnership has extended from University of Iceland and Landspitali University Hospital to include chronic care populations in the hospital, intensive care units, in out-patient clinics -pulmonary, neurological and elderly- to research and interdisciplinary and international collaboration at University Medical Center, Utrecht the Netherlands and some universities in Scandinavia. These activities have received funding from the Research Fund of the University of Iceland, Rannis, the Icelandic Center for Research, NordForsk, the Nordic Economic and Social Research Council and the Erasmus + Programme.
Dr. Marit Kirkevold, RN, Ed.D. is a professor of nursing science at the University of Oslo, Norway. She completed basic training as a professional nurse at Oslo University college in Norway in 1981 and a Bachelor of nursing at Long Island University, NY in 1984. She received a Master of Arts and a Master of Education Degree in nursing from Columbia University, NY in 1986 and a Doctor of Education from Columbia University, NY in 1989. Kirkevold’s research has focused on long term care of older people and nursing care of persons suffering from chronic conditions. She also has an interest in the historical development of nursing science. She initiated and led a Norwegian teaching nursing home program between 1997 and 2003 and has led the Research Center for Habilitation and Rehabilitation Services and Models (CHARM) during the last six years. She is currently the head of a National research school aimed at developing research capacity within the municipal health and care services in Norway and leader of the research group on psychosocial wellbeing following stroke. Kirkevold has been the main supervisor for almost 30 PhD candidates. She has been a professor of nursing science at Aarhus University in Denmark for a number of years, and has established research collaboration with several Danish colleagues. She is currently guest professor at Gothenburg University in Sweden and has been involved in international research collaboration in the area of aged care, psychosocial rehabilitation and wellbeing and person-centered dementia care for a number of years.
Dr. Ingalill Rahm Hallberg, RN, spec in mental health, RNT, PhD, FEANS, FAAN is professor emeritus at Lund University, in Sweden. She is honorary member of the Swedish Medical Society. She worked about 20 years as a nurse, mainly in mental health. After obtaining her PhD she was elected pro-dean at the medical faculty, Lund University for six years. She also was the head of the Vårdalinstitutet during six years and there she built up this interdisciplinary research environment. Thereafter she was assistant vice chancellor at Lund University. Before retirement she was also pro-vice chancellor at the university. She has been the main supervisor of 29 nurses obtaining a PhD and co-supervisor to eight nurses obtaining their PhD. She has published more than 225 original papers in international peer reviewed papers, several books or book chapters, internationally as well as in Swedish. Her current research is exploring the relationship between body and mind, specifically “The molecular fingerprints of psychological resilience in breast cancer patients”, a study initiated by her. In addition she is researching the care of people with dementia in nine Swedish municipalities.

“This book is interesting and thought‐provoking. … This book is a wonderful acquisition for anyone interested in understanding global health concepts and current changes, considering the world in which we all provide healthcare. This is a wonderful, well‐written, and innovative book!” (Cynthia Cummings, Doody's Book Reviews, July 19, 2019)
Buy options