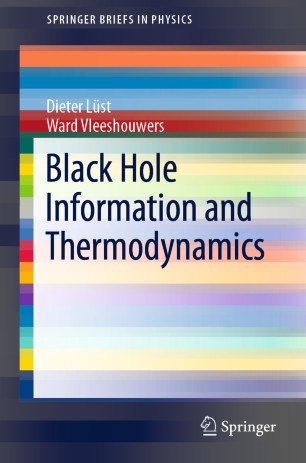 Based on Prof. Lüst's Masters course at the University of Munich, this book begins with a short introduction to general relativity. It then presents black hole solutions, and discusses Penrose diagrams, black hole thermodynamics and entropy, the Unruh effect, Hawking radiation, the black hole information problem, black holes in supergravity and string theory, the black hole microstate counting in string theory, asymptotic symmetries in general relativity, and a particular quantum model for black holes. The book offers an up-to-date summary of all the pertinent questions in this highly active field of physics, and is ideal reading for graduate students and young researchers.

D. Lüst is professor for Theoretical Physics at the Ludwig-Maximilian University in Munich (chair Mathematical Physics) and Director of the Max Planck Institute for Physics in Munich. His work focuses on string theory as an attempt to unify General Relativity and Quantum Mechanics, and more specifically on duality symmetries, black holes, models for quantum space-time, string model building and extended theories of gravity. For his work he received the Gottfried Wilhelm Leibniz-Preis of the German-Research-Foundation (DFG) in 2000, as well as an Advanced Research Grant of the European Research Council in the year 2012.
Ward Vleeshouwers is currently doing a joint PhD at the universities of Amsterdam and Utrecht on topological condensed matter physics and string theory. In preparation for his master thesis on BMS-symmetries and the black hole S-matrix under supervision of Prof. Gerard 't Hooft, he took a course on black hole thermodynamics during an exchange semester in Munich, which eventually resulted in the writing of this book.