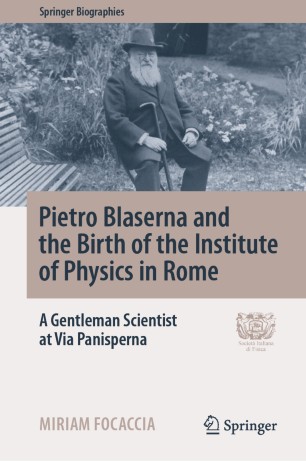 A Gentleman Scientist at Via Panisperna

This book draws upon a wealth of archival material to present the life and achievements of Pietro Blaserna, a “gentleman scientist” whose greatest legacy is considered to be the Institute of Physics on the Via Panisperna in Rome, of which he was the creator and first director. Both in this role and as President of the Accademia dei Lincei, Blaserna contributed enormously in establishing a sound institutional base for the further development of physics in Italy. Starting from an accurate historical reconstruction of the scientific, social, and political context, the author presents the different phases of Pietro Blaserna’s life and career. As a multifaceted intellectual and a scientist holding several institutional positions, Blaserna worked ceaselessly to promote an effective policy in science and technology, which was critically important in stimulating the development of Italy as a modern nation. Blaserna may not have left scientific works that made history, but what he created in Rome was a real "house of physics", equipped with modern laboratories and instruments. In tracing his important legacy, this book will be of interest for all historians of science and for historians of nineteenth and twentieth century Italy.

Miriam Focaccia is a researcher in the History of Science at the Museo Storico della Fisica e Centro Studi e Ricerche Enrico Fermi in Rome and the Department of Philosophy at the University of Bologna. Her key research topics are the History of Scientific Institutions between the 18th and 20th centuries in Italy; the relationship between science and art in the 18th century in Bologna; the relationship between women and science in Italy until the Second World War; and scientific biographies of Italian scientists. At present she is working on the history of electrification in Italy between 1860 and the First World War. She is also collaborating with Dizionario Biografico degli Italiani, Treccani, and the website: http://scienzaa2voci.unibo.it on the topic: Women in Italian science from the 18th to the 20th century. From 2012 to 2018 she was secretary of the Italian Society of the History of Science (SISS).