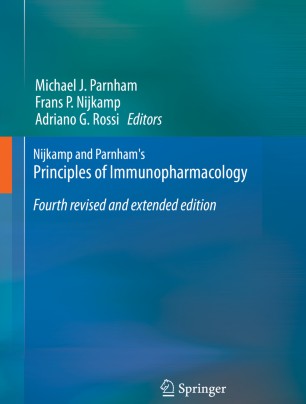 Nijkamp and Parnham's Principles of Immunopharmacology

Principles of Immunopharmacology provides a unique source of essential knowledge on the immune response, its diagnosis and its modification by drugs and chemicals. The 4th edition of this internationally recognized textbook has been revised to include recent developments, but continues the established format, dealing with four related fields in a single volume, thus obviating the need to refer to several different textbooks.

The first section of the book, providing a basic introduction to immunology and its relevance for human disease, has been updated to accommodate new immunological concepts, particularly the role of epigenetics and the latest understanding of cancer immunology. The second section on immunodiagnostics offers a topical description of widely used molecular techniques and a new chapter on imaging techniques. This is followed by a systematic coverage of drugs affecting the immune system, including natural products. This third section contains 15 updated chapters, covering classical immunopharmacological topics such as anti-asthmatic, anti-rheumatic and immunosuppressive drugs, but also deals with antibiotics, plant-derived and dietary agents, with new chapters on monoclonal antibodies, immunotherapy in sepsis and infection, drugs for soft-tissue autoimmunity and cell therapy. The book concludes with a chapter on immunotoxicology and drug safety tests.

Aids to the reader include a two-column format, glossaries of technical terms and appendix reference tables. The emphasis on illustrations is maintained from the first three editions.

The book is a valuable single reference for undergraduate and graduate medical and biomedical students, postgraduate chemistry and pharmacy students, researchers in chemistry, biochemistry and the pharmaceutical industry and researchers lacking basic immunological knowledge, who want to understand the actions of drugs on the immune system.

Michael J Parnham is Head of Translational Validation in the Fraunhofer Institute for Molecular Biology & Applied Ecology IME Branch for Translational Medicine and Biology TMP and Professor of Pharmacology and Toxicology at Goethe University Frankfurt, Germany.  He was Editor of the journal Inflammation Research for 30 years and is Chief Editor of Compendium of Inflammatory Diseases. He directs research on novel methods, biomarkers and drug candidates for pain, autoimmunity and inflammation, working closely with clinical colleagues and industry. After studies in pharmacology in London and Bristol and postdoc research at Erasmus University Rotterdam, he spent over 30 years in senior research management in drug discovery and preclinical development with Nattermann, Rhône-Poulenc, PLIVA and GSK, including an 8 year period as a consultant. He helped take 6 projects to clinical trials. He is a co-recipient of the Galenus-von Pergamon Prize Germany, recipient of the Lifetime Achievement Award of the International Association of Inflammation Societies and a Fellow of the British Pharmacological Society.

Frans P. Nijkamp, emeritus professor Pharmacology,  Utrecht University, Utrecht Institute for Pharmaceutical Sciences, Utrecht, The Netherlands. He was head of the Department of Pharmacology and Pathphysiology. He was Editor-in-Chief of the European Journal of Pharmacology. His main field of research was focussed around the Immunopharmacology of the Respiratory- and Gastrointestinal system. He was (co)author of more than 500 scientific publications. In 2006 he received the Saal van Zwanenburg Price for his total scientific oeuvre.

Adriano G Rossi is Deputy Director and Postgraduate Director of the Centre for Inflammation Research at the University of Edinburgh. He obtained a BSc (Hons) degree in Pharmacology (1984) and a PhD degree (1987) from the Department of Pharmacology, University of Glasgow and carried out postdoctoral research at Wake Forest University, North Carolina, USA. He then held a Wellcome Trust Post-Doctoral grant and lectureship in the Department of Applied Pharmacology (NHLI, University of London). Following some time in the pharmaceutical industry he joined the Respiratory Medicine Unit, University of Edinburgh and has been an active researcher and teacher at the University of Edinburgh for over 22 years. He was awarded a DSc degree (2010) from the University of Edinburgh and is a Fellow of the Royal Society of Biology and of the British Pharmacological Society.  Professor Rossi’s major research aims are to gain a better understanding of inflammatory processes, especially the mechanisms involved in the resolution of inflammation, tissue repair and regeneration with a view to help develop novel therapies for chronic inflammatory and fibrotic diseases.  He is currently Co-Editor-in-Chief of the Journal of Inflammation, has published over 230 peer-reviewed articles and held many major research grants, including three MRC UK programme grants, two of which as principal investigator.