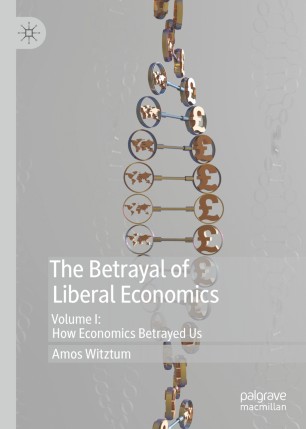 The Betrayal of Liberal Economics

Volume I: How Economics Betrayed Us

The presumed sovereignty of individuals and the facilitating powers of the markets have generated a universal and ethically neutral conception of both social and economic organisation. This ground-breaking text  re-examines the purpose of society and the role of economics in it, arguing that the absence of a beneficial natural order calls for the role of the collective in social and economic life to be revisited. Drawing on some key figures marking milestones in the evolution of social and economic thinking, the author offers a critique of mainstream economics as a way of thinking and as a provider of guiding principles for economic and social organisation.
Volume I introduces the reader to the emergence of natural order; considers the internal logic of economics and how it managed to be so persuasive in its recommendation for competitive interactions to govern all aspects of social life in all societies and across them; demonstrates that the economic conception of an order which solves society’s economic problem is, in fact, an impossibility that turns the natural phenomenon of markets into a problem rather than an ideal; and, addresses the other apparent appeal of markets: their association with the ideas of freedom and justice.
This is a bold and foundational new work that offers an original and innovative perspective on economics and its challenges, addressing core areas such as behavioural economics, evolutionary game theory and links between social sciences (anthropology, philosophy) and neurosciences.”