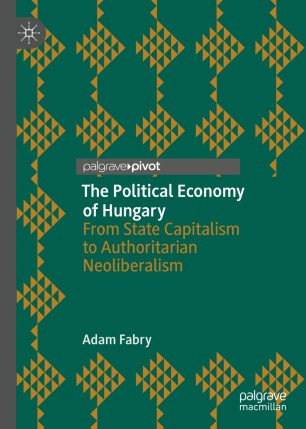 The Political Economy of Hungary

From State Capitalism to Authoritarian Neoliberalism

This book explores the political economy of Hungary from the mid-1970s to the present. Widely considered a ‘poster boy’ of neoliberal transformation in post-communist Eastern Europe until the mid-2000s, Hungary has in recent years developed into a model ‘illiberal’ regime. Constitutional checks-and-balances are non-functioning; the independent media, trade unions, and civil society groups are constantly attacked by the authorities; there is widespread intolerance against minorities and refugees; and the governing FIDESZ party, led by Prime Minister Viktor Orbán, controls all public institutions and increasingly large parts of the country’s economy. To make sense of the politico-economical roller coaster that Hungary has experienced in the last four decades, Fabry employs a Marxian political economy approach, emphasising competitive accumulation, class struggle (both between capital and labour, as well as different ‘fractions of capital’), and uneven and combined development. The author analyses the neoliberal transformation of the Hungarian political economy and argues that the drift to authoritarianism under the Orbán regime cannot be explained as a case of Hungarian exceptionalism, but rather represents an outcome of the inherent contradictions of the variety of neoliberalism that emerged in Hungary after 1989.

Adam Fabry is Research Fellow for the Technical Research Council in the Centre for Study on Culture and Society at National University of Córdoba, Argentina. He currently researches the comparative political economy of neoliberalism in Eastern Europe and Latin America. He has previously published in journals, such as Capital & Class, Competition & Change, and Eszmélet, as well as blog posts for LeftEast and Jacobin.