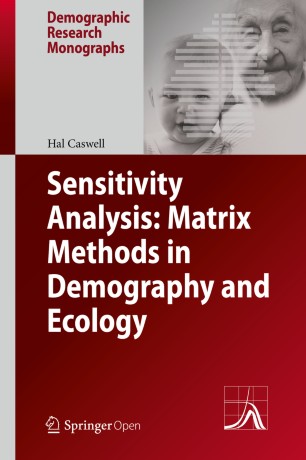 This open access book shows how to use sensitivity analysis in demography. It presents new methods for individuals, cohorts, and populations, with applications to humans, other animals, and plants. The analyses are based on matrix formulations of age-classified, stage-classified, and multistate population models. Methods are presented for linear and nonlinear, deterministic and stochastic, and time-invariant and time-varying cases.  Readers will discover results on the sensitivity of statistics of longevity, life disparity, occupancy times, the net reproductive rate, and statistics of Markov chain models in demography. They will also see applications of sensitivity analysis to population growth rates, stable population structures, reproductive value, equilibria under immigration and nonlinearity, and population cycles. Individual stochasticity is a theme throughout, with a focus that goes beyond expected values to include variances in demographic outcomes.

The calculations are easily and accurately  implemented in matrix-oriented programming languages such as Matlab or R. Sensitivity analysis will help readers create models to predict the effect of future changes, to evaluate policy effects, and to identify possible evolutionary responses to the environment.

Complete with many examples of the application, the book will be of interest to researchers and graduate students in human demography and population biology. The material will also appeal to those in mathematical biology and applied mathematics.

Hal Caswell is a mathematical demographer and ecologist specializing in matrix models for populations. He has a long association with the Woods Hole Oceanographic Institution and the Max Planck Institute for Demographic Research, and is now Professor of Mathematical Demography and Ecology at the University of Amsterdam.
His research interests include the theory of matrix population models and their applications to evolutionary demography, conservation and the effects of climate change, health demography, lifetime reproductive output and fertility, and the interaction of stochasticity and heterogeneity in populations. In addition to his work on humans, he has studied the demography of polar bears, penguins, nematodes, and terrestrial plants. Much of this work involves sensitivity analysis, the topic of this volume.
Caswell has been recognized by numerous international awards and fellowships in both human demography and ecology. He is the author of Matrix Population Models (2nd edition, Sinauer Associates, 2001) and co-author with the late Nathan Keyfitz of Applied Mathematical Demography (3rd edition, Springer-Verlag).