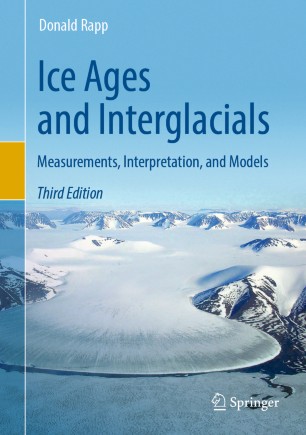 It is not so long ago (a mere 17,000 years – a blink in geologic time) that vast areas of the Northern Hemisphere were covered with ice sheets up to two miles thick, lowering the oceans by more than 120 m. By 11,000 years ago, most of the ice was gone.

Evidence from polar ice cores and ocean sediments show that Ice Ages were persistent and recurrent over the past 800,000 years. The data suggests that Ice Ages were the normal state, and were temporarily interrupted by interglacial warm periods about nine times during this period.

The data also indicates that Ice Ages will persist regardless of solar input to high northern latitudes, until several conditions are met that are necessary to generate a termination of an Ice Age. An Ice Age will not terminate until it has been maturing for many tens of thousands of years leading to a reduction of the atmospheric CO2 concentration to less than 200 ppm. At that point, CO2 starvation coupled with lower temperatures will cause desertification of marginal regions, leading to the generation of large quantities of dust. High winds transfer this dust to the ice sheets greatly increasing their solar absorptivity, and at the next up-lobe in the solar input to high northern latitudes, solar power melts the ice sheets over about a 6,000-year interval.

This third edition presents data and models to support this theory.