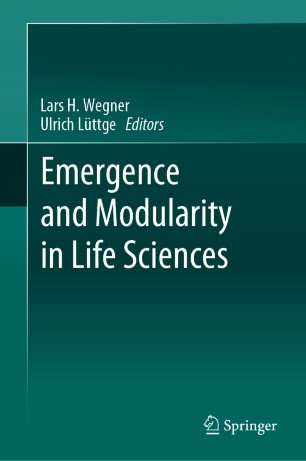 Emergence and Modularity in Life Sciences

This book focuses on modules and emergence with self-organization in the life sciences. As Aristotle observed so long ago, the whole is more than the sum of its parts. However, contemporary science is dominated by reductionist concepts and tends to neglect the non-reproducible features of complex systems, which emerge from the interaction of the smaller units they are composed of.
The book is divided into three major parts; the essays in part A highlight the conceptual basis of emergence, linking it to the philosophy of science, systems biology and sustainability. This is subsequently exemplified in part B by applying the concept of emergence to various biological disciplines, such as genetics, developmental biology, neurobiology, plant physiology and ecology. New aspects of emergence come into play when biology meets the technical sciences, as revealed in a chapter on bionics. In turn, part C adopts a broader view, revealing how the organization of life follows a hierarchical order in terms of scalar dimensions, ranging from the molecular level to the entire biosphere. The idea that life is primarily and exclusively shaped by processes at the molecular level (and, in particular, by the information encoded in the genome) is refuted; rather, there is no hierarchy with respect to the level of causation in the cross-talk between the levels. In the last two chapters, the evolutionary trend toward ever-increasing complexity in living systems is interpreted in terms of the Gaia hypothesis sensu Lovelock: the entire biosphere is viewed as a functional unit (or ‘holobiont-like system’) organized to develop and sustain life on Earth.

Prof. Ulrich Lüttge is a Professor Emeritus of the Department of Biology, Technical University of Darmstadt, Germany. He studied biology and chemistry at the Ludwig-Maximilian-University of Munich and wrote his dissertation on nectary glands and secretion in 1960; he subsequently completed his postdoctoral studies (Habilitation) with a thesis on carnivorous plants at the then Technische Hochschule Darmstadt (THD) in 1964. After postdoctoral stays at the University of California, Los Angeles (1965/1966) and at the Research School of Biological Sciences, Australian National University, Canberra (1968/1969) and various positions at the THD, he was appointed a Full Professor of Botany at the newly renamed Technical University of Darmstadt (TUD) in 1970.
His chief research interests are in the transport physiology and biophysical and biochemical membrane biology of plants. Studies of transport functions led to a longstanding occupation with Crassulacean acid metabolism (CAM) as an eco-physiological adaptation particularly to limited water supply, and to extensive fieldwork over several decades in the tropics (in Trinidad, Venezuela, French Guyana, the Virgin Islands, Ethiopia and Brazil).
The author of roughly 580 publications, including more than a dozen books, Ulrich Lüttge is also editor of the journal “Trees: Structure and Function” and the annual review-book series “Progress in Botany.” In 1982 and in 1999 he was Regents Lecturer at the University of California at Riverside and at Davis, respectively. In 1996 he and his colleagues received the Körber Prize for European Science. He is a Member of the Deutsche Akademie der Naturforscher Leopoldina, Honorary Member of the Deutsche Botanische Gesellschaft and Membre étranger Académie d‘Agriculture de France, Paris.
After retiring in 2004, he continued teaching and lecturing on the physiological ecology of tropical plants for several years, and until very recently he published original studies in this field. Over the years his interests have also shifted to general topics of non-linear dynamics and spatio-temporal principles in biology. In essays published alone or together with peers modularity versus emergence and self-organization is addressed, considering whole-plant integration with signaling and transfer of information and plant memory, both top-down and bottom-up hierarchies, and the relations between plasticity, diversity, complexity and stability. Existential implications are also considered, such as natural self-management of ecosystems versus anthropogenic management and sustainability of the biosphere or Gaia with the question of the sustainment of humankind on Earth in view of ruthless exploitation, together with the problem of food security for rapidly growing populations. Thoughts on beauty in nature and science, and on the relations between natural science and spirituality, touch on transcendental categories.