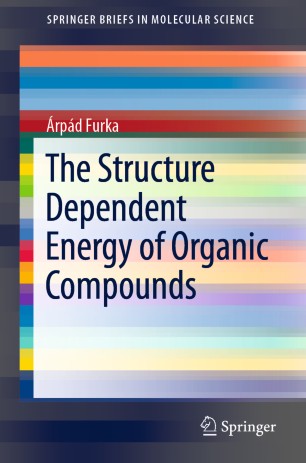 This brief introduces readers to an alternative thermochemical reference system that makes it possible to use the heats of formation of organic compounds to deduce the energies that depend entirely on their structures, and which provides calculated values for most of the characteristic structures appearing in organic molecules. These structure-dependent energies are provided e.g. for selected compounds of normal and cyclic alkanes, open chain and cyclic olefins (including conjugated polyenes), alkynes, aromatic hydrocarbons and their substituted derivatives. The oxygen, sulfur and nitrogen derivatives of the above-mentioned compounds are also represented with calculated structure-dependent energies including alcohols, ethers, aldehydes and ketones, carboxylic acids, thiols, sulfides, amines, amides, heterocyclic compounds and others.
Most organic reactions can be interpreted as the disappearance of certain structures and formation of others. If the structure-dependent energies are known, it can be shown how the disappearing and the newly formed structures contribute to the heat of reactions and to the driving forces. As experienced by the author, who pioneered the concept, structure dependent energies can help teachers to make organic chemistry more accessible for their students. Accordingly, the brief offers a valuable resource for all those who teach organic chemistry at universities, and for those who are learning it.