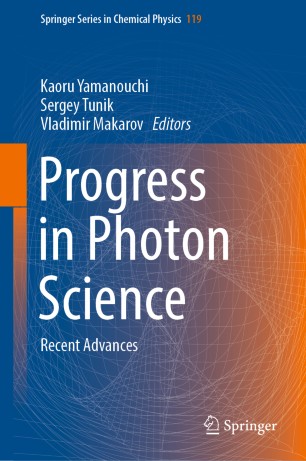 This second volume of “Progress in Photon Science – Recent Advances” presents the latest achievements made by world-leading researchers in Russia and Japan. Thanks to recent advances in light source technologies; detection techniques for photons, electrons, and charged particles; and imaging technologies, the frontiers of photon science are now being expanding rapidly. Readers will be introduced to the latest research efforts in this rapidly growing research field through topics covering bioimaging and biological photochemistry, atomic and molecular phenomena in laser fields, laser–plasma interaction, advanced spectroscopy, electron scattering in laser fields, photochemistry on novel materials, solid-state spectroscopy, photoexcitation dynamics of nanostructures and clusters, and light propagation.

Kaoru Yamanouchi has been Professor of Chemistry at The University of Tokyo since April 1997.  His research fields are in physical chemistry and AMO physics, especially gas phase laser spectroscopy, chemical reaction dynamics, and intense laser science.

Education: Kaoru Yamanouchi graduated from Department of Chemistry, the University of Tokyo in 1981. After receiving Master's Degree from Graduate School of Chemistry in 1983, he received Doctor's Degree from the same graduate school in 1986.

Experience: One year before receiving the doctor's degree he was appointed as Research Associate at Department of Pure and Applied Sciences of the University of Tokyo. He was promoted to Associate Professor in 1990, and had been in the position for seven years until he became Professor of Chemistry in 1997.

Research achievements: in 1996, he launched a new research project to investigate how atoms, molecules, and clusters behave in an intense laser field whose magnitude is as large as that of a Coulomb field within atoms and molecules. By developing new experimental techniques such as mass-resolved momentum imaging, pulsed gas electron diffraction, and coincidence momentum imaging, he has continued a successful exploration of the new research field of ultrafast intense laser science. Among his discoveries, ultrafast structural deformation of molecules and ultrafast hydrogen atom migration within hydrocarbon molecules are particularly noteworthy. He has also demonstrated that the ultrafast structural changes of molecules can in principle be probed in real time with femtosecond temporal resolution using a method called laser-assisted electron diffraction. He is the author of more than 200 original papers (as of 2014) and the author/editor of 22 books.