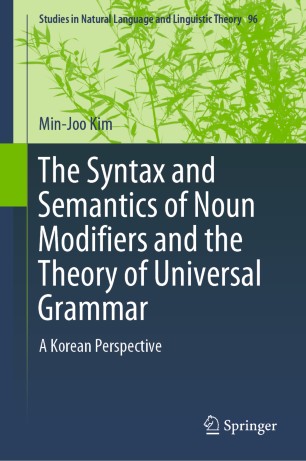 This book takes Korean as a basis to provide a detailed universal Determiner Phrase (DP) structure. Adnominal adjectival expressions are apparently optional noun dependents but their syntax and semantics have been shown to provide an important window on the internal structure of DP. By carefully examining data from Korean, an understudied language, as well as from other unrelated languages, the book provides a broad perspective on the phenomenon of noun modification and its cross-linguistic variations. Furthermore, it offers not only a thorough syntactic analysis but also a formal semantic analysis of noun modifiers that extends beyond a single language. This book will be of great interest to researchers interested in theoretical syntax, its interfaces with semantics, pragmatics, linguistic typology, and language variation. ​

With a wealth of data and important observations, in this volume Kim ventures into a notoriously difficult domain. She sheds new light on old puzzles and articulates some fresh new ones. The analysis of the Korean extended DP—and of nominals across languages—offered here is important and interesting, but it’s the deeper analytical insights that underlie it that ensure this work’s lasting relevance. Marcin Morzycki, Michigan State University, USA