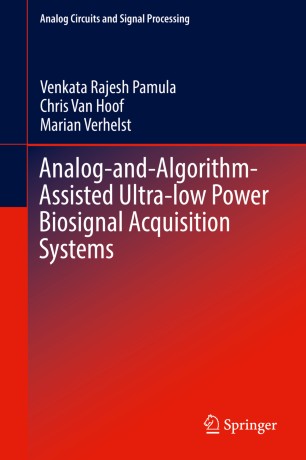 Venkata Rajesh Pamula received in BTech in electrical engineering in 2007 from the Indian Institute of Technology and Master of science from Imperial College London in 2010. He worked in various capacities with the Samsung Semiconductors between 2007-09 and 2010-12 before starting to work towards his PhD at KU Leuven in association with imec Belgium. He is currently a visiting scientist with the department of electrical engineering, University of Washington Seattle. His major areas of research are ultra low power sensor readouts, energy efficient mixed signal circuits and systems.

Mr. Pamula is a recipient of the Government of Andhra Pradesh Gold Medal in 2003, ISSCC analog devices outstanding student designer award in 2016 and also received four gold medals from IIT in 2007 for outstanding academic performance.

Chris Van Hoof is Senior Director of Connected Health Solutions at imec in Leuven, Belgium and Eindhoven, the Netherlands and imec Fellow. He is also full professor (part-time) in the Electrical Engineering Department of KU Leuven. After a PhD in Electrical Engineering (University of Leuven, 1992), Chris Van Hoof has held positions at imec at manager and director level in diverse technical fields (sensors and imagers, MEMS and autonomous microsystems, wireless sensors, patient monitoring solutions, medical devices, behavioral technology). He has published over 700 papers in journals and conference proceedings in those fields and has given over 100 invited talks. His R&D has resulted in 5 startups (4 in the healthcare domain) and he has delivered flight hardware to 2 European Space Agency missions.

Prof. Dr. ir. Marian Verhelst is a professor at the MICAS laboratories (MICro-electronics And Sensors) of the Electrical Engineering Department of KU Leuven. Her research focuses on embedded machine learning, energy-efficient hardware accelerators, self-adaptive circuits and systems, and low-power sensing and processing. Before that, she received a PhD from KU Leuven cum ultima laude, she was a visiting scholar at the Berkeley Wireless Research Center (BWRC) of UC Berkeley, and she worked as a research scientist at Intel Labs, Hillsboro OR. Prof. Verhelst is an SSCS Distinguished Lecturer and a member of the DATE conference executive committee. She held various roles in the ESSCIRC and ISSCC TPCs, the ISSCC executive committee, the Young Academy of Belgium, editorial board of TCAS-II and JSSC, and the STEM advisory commitee to the Flemish Government. Marian holds a prestigious ERC Grant from the European Union.