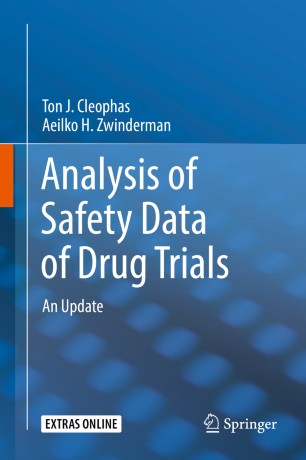 The authors, as professors in statistics at various universities in Europe, are worrried about the poor quality of safety data analysis of clinical trials, despite its importance in drug development and pharmacovigilance.

Clinical trials, not adequately addressing safety, are unethical. An effective approach for the purpose is to present summaries of prevalences. In order to estimate the probability, that the differences between treatment and control group did not occur merely by chance, a statistical test can be performed. This pretty crude method has recently be supplemented with better sensitive methodologies, based on machine learning clusters and networks, and multivariate analyses.

Another important novelty with safety data analysis is the new insights into hypothesis testing, favoring the alternative hypotheses instead of the null hypotheses.


Finally the issue of dependency is addressed. Adverse effects may be either dependent or independent of the main outcome. Dependent adverse effect are dependent not only on the treatment modalities, but also on the outcome of the trials. Random heterogeneities, outliers, confounders, interaction factors are common in clinical trials, and all of them can be considered kinds of adverse effects of the dependent type. Random regressions and analyses of variance, high dimensional clusterings, partial correlations, structural equations models, and other Bayesian methods are helpful for their analysis.

The current edition was particularly written for medical and health professionals and students. It provides examples of modern analytic methods so far largely unused. All of the 16 chapters have two core characteristics, first they are for current usage, second they try and tell what readers need to know in order to understand the methods. Step by step analyses are given and self-assessment examples are supplied. Each chapter can be studied as a stand-alone.

The authors are well-qualified in their field. Professor Zwinderman is past-president of the International Society of Biostatistics (2012-2015), and Professor Cleophas is past-president of the American College of Angiology (2000-2002).
Professor Zwinderman is one of the Principle Investigators of the Academic Medical Center Amsterdam, and his research is concerned with developing statistical methods for new research designs in biomedical science, particularly integrating omics data, like genomics, proteomics, metabolomics, and analysis tools based on parallel computing and the use of cluster computers and grid computing.
Professor Cleophas is a member of the Academic Committee of the European College of Pharmaceutical Medicine, that provides, on behalf of 22 European Universities, the Master-ship trainings  "Pharmaceutical Medicine" and "Medicines Development".
From their expertise they should be able to make adequate selections of modern methods for clinical data analysis for the benefit of physicians, students, and investigators. The authors have been working and publishing together for 18 years, and their research can be characterized as a continued effort to demonstrate that clinical data analysis is not mathematics but rather a discipline at the interface of biology and mathematics.
The authors as professors and teachers in statistics at universities in The Netherlands and France for the most part of their lives, are concerned, that their students find regression-analyses harder than any other methodology in statistics. This is serious, because almost all of the novel methodologies in current data mining and data analysis include elements of regression-analysis, and they do hope that the current production "Regression Analysis for Starters and 2nd Levelers" will be a helpful companion for the purpose.
Five textbooks complementary to the current production and written by the same authors are
Statistics applied to clinical studies 5th edition, 2012,
Machine learning in medicine a complete overview, 2015,
SPSS for starters and 2nd levelers 2nd edition, 2015,
Clinical data analysis on a pocket calculator 2nd edition, 2016,
Modern Meta-analysis, 2017
Regression Analysis in Medical Research, 2018
all of them published by Springer

“The analysis of safety data in drug trials, or in other drug studies, is an important topic. … it is doubtful that this would make it a real book about safety analysis.” (ISCB News, Vol. 68, 2019)