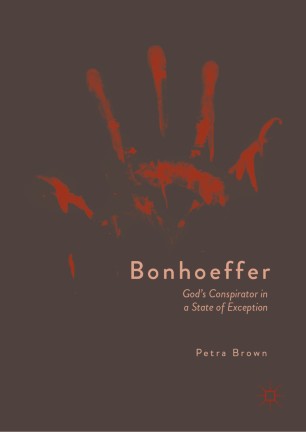 God’s Conspirator in a State of Exception

Theologian. Conspirator. Martyr. Saint. Dietrich Bonhoeffer was killed in the waning days of World War II, having been implicated in the July 20th assassination attempt on Hitler. Since his death, Bonhoeffer’s life and writings have inspired contradictory responses. He is often seen as a model for Christian pacifist resistance, and more recently for violent direct political action. Bonhoeffer’s name has been invoked by violent anti-abortion protestors as well as political leaders calling for support on a ‘war on terror’ in the aftermath of 9/11. Petra Brown critically analyses Bonhoeffer’s writing preceding and during his conspiracy involvement, particularly his recurring concept of the ‘extraordinary.’ Brown examines this idea in light of ‘the state of exception,’ a concept coined by the one-time Nazi jurist and political theorist, Carl Schmitt. She also draws on the existentialist philosopher Sören Kierkegaard to consider what happens when discipleship is understood as obedience to a divine command. This book aims to complicate an unreflective admiration of Bonhoeffer’s decision for conspiracy, and draws attention to the potentially dangerous implications of his emerging political theology.

Petra Brown is a lecturer in philosophy at Deakin University, Australia.