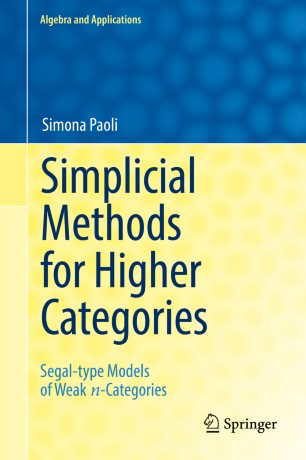 Part of the Algebra and Applications book series (AA, volume 26)

This monograph presents a new model of mathematical structures called weak $n$-categories. These structures find their motivation in a wide range of fields, from algebraic topology to mathematical physics, algebraic geometry and mathematical logic. While strict $n$-categories are easily defined in terms associative and unital composition operations they are of limited use in applications, which often call for weakened variants of these laws. The author proposes a new approach to this weakening, whose generality arises not from a weakening of such laws but from the very geometric structure of its cells; a geometry dubbed weak globularity. The new model, called weakly globular $n$-fold categories, is one of the simplest known algebraic structures yielding a model of weak $n$-categories. The central result is the equivalence of this model to one of the existing models, due to Tamsamani and further studied by Simpson. This theory has intended applications to homotopy theory, mathematical physics and to long-standing open questions in category theory.

As the theory is described in elementary terms and the book is largely self-contained, it is accessible to beginning graduate students and to mathematicians from a wide range of disciplines well beyond higher category theory. The new model makes a transparent connection between higher category theory and homotopy theory, rendering it particularly suitable for category theorists and algebraic topologists. Although the results are complex, readers are guided with an intuitive explanation before each concept is introduced, and with diagrams showing the inter-connections between the main ideas and results.