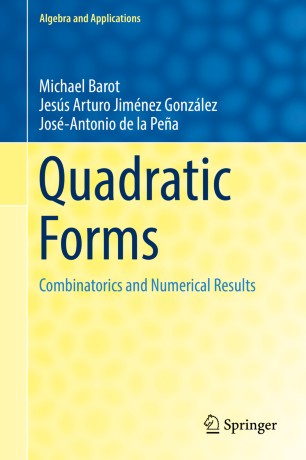 Part of the Algebra and Applications book series (AA, volume 25)

This monograph presents combinatorial and numerical issues on integral quadratic forms as originally obtained in the context of representation theory of algebras and derived categories.

Some of these beautiful results remain practically unknown to students and scholars, and are scattered in papers written between 1970 and the present day. Besides the many classical results, the book also encompasses a few new results and generalizations.

The material presented will appeal to a wide group of researchers (in representation theory of algebras, Lie theory, number theory and graph theory) and, due to its accessible nature and the many exercises provided, also to undergraduate and graduate students with a solid foundation in linear algebra and some familiarity on graph theory.

Michael Barot obtained his Ph.D. in 1997 at UNAM. He then worked at the Mathematics Institute, focusing on representation theory of finite-dimensional algebras, cluster algebras and Lie algebras. In 2012, he started working as a high school teacher in Switzerland.
Jesús Arturo Jiménez González received his Ph.D. in Mathematics from UNAM and Universidad Michoacana de San Nicolás de Hidalgo in 2015. His work focuses on representation theory of finite dimensional associative algebras.
José-Antonio de la Peña has a Ph.D. in Mathematics from UNAM (1983) and a Ph.D. from the Univeristy of Zürich (1985). His main areas of research are representation theory of algebras, where he has published more than 100 papers, and algebraic graph theory, where he has published more than 30 papers. He was Director of the Mathematics Institute at UNAM (1996-2004) and CIMAT, a mathematical research center from CONACYT (2011-2017). He is the author of several books, and 10 students have so far received doctoral degrees under his supervision.