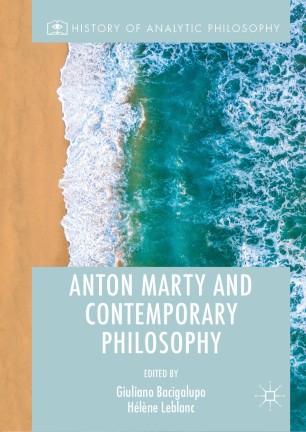 This edited collection of eight original essays pursues the aim of bringing the spotlight back on Anton Marty. It does so by having leading figures in the contemporary debate confront themselves with Marty’s most significative contributions, which span from philosophy of mind, philosophy of language and ontology to meta-metaphysics and meta-philosophy.

The book is divided in three parts. The first part is dedicated to themes in philosophy of language, which were at the centre of Marty’s philosophical thinking throughout his life. The second part focuses on the problem of the objectivity and phenomenology of time and space, upon which Marty was working in the final years of his life. The final part turns to Marty’s meta-metaphysical and meta-philosophical considerations. The intended audience of this book are primarily scholars and students interested in the relevant contemporary debates, as well as scholars working on the Austrian tradition.

Giuliano Bacigalupo has held positions at the University of Geneva, Switzlerand, the University of Konstanz, Germany, and Seattle University, USA. He has published several papers on the Austro-German tradition and he is author of the book A Study on Existence(Cambridge Scholars, 2017).

Hélène Leblanc is a Postdoctoral Research Fellow at the University of Geneva, Switzerland. She earned her PhD in Philosophy (Lille/Lecce) with a thesis on semiotic theories in Early Modern Philosophy and has published several papers on this topic. Recently, she edited the thematic issue Beauty and Ugliness in the Austro-German Tradition for the Italian journal Paradigmi.