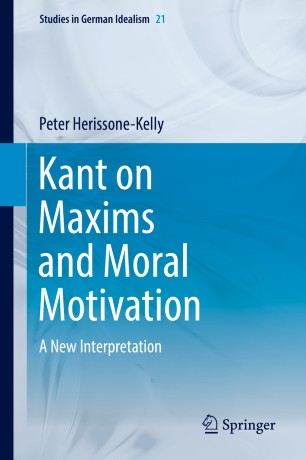 Kant on Maxims and Moral Motivation

This book outlines and circumvents two serious problems that appear to attach to Kant’s moral philosophy, or more precisely to the model of rational agency that underlies that moral philosophy: the problem of experiential incongruence and the problem of misdirected moral attention. The book’s central contention is that both these problems can be sidestepped. In order to demonstrate this, it argues for an entirely novel reading of Kant’s views on action and moral motivation.

In addressing the two main problems in Kant’s moral philosophy, the book explains how the first problem arises because the central elements of Kant’s theory of action seem not to square with our lived experience of agency, and moral agency in particular. For example, the idea that moral deliberation invariably takes the form of testing personal policies against the Categorical Imperative seems at odds with the phenomenology of such reasoning, as does the claim that all our actions proceed from explicitly adopted general policies, or maxims. It then goes on to discuss the second problem showing how it is a result of Kant’s apparent claim that when an agent acts from duty, her reason for doing so is that her maxim is lawlike. This seems to put the moral agent’s attention in the wrong place: on the nature of her own maxims, rather than on the world of other people and morally salient situations. The book shows how its proposed novel reading of Kant’s views ultimately paints an unfamiliar but appealing picture of the Kantian good-willed agent as much more embedded in and engaged with the world than has traditionally been supposed.

Peter Herissone-Kelly is Senior Lecturer in Philosophy at the University of Central Lancashire, Preston, UK, where he teaches ethics, metaphysics, epistemology, and philosophy of language. In addition to his work on Kant, he has published widely in bioethics, and in particular on the ethics of new reproductive technologies.