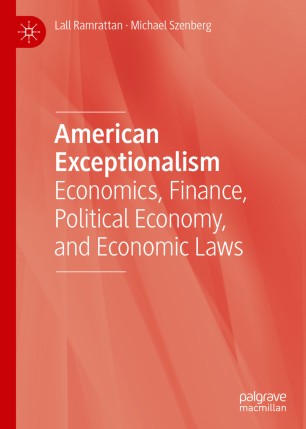 The publication of Alexis de Tocqueville’s Democracy in America has kindled interest across disciplines to appraise the exceptional nature of U.S. activities. In general, however, all the published works have not focused their analyses from an economic point of view. While economics was for some a “dismal science” following Thomas Carlyle’s characterization of Malthus’ demographic model, it has increasingly become the “queen of the social sciences” for more practitioners. The book fills a gap in the literature by describing the American contributors as precursors and genuinely exceptional economists. We present their works within the state of the nation in which they advance their discipline.

One is treated to both qualitative and quantitative theories in the opening chapter. Budding theories that became established theories of Economics and Finance are investigated in Chapters II and III.  When President John Adams was confronted with M. Turgot’s criticisms of the American government, he resorted to a historic survey of types of government from ancient Greece to the Middle Ages. Similarly, we have included a final chapter, Chapter IV, to present the argument for American Exceptionalism in the domain of Political Economy and Economic Law over the ages.

Lall Ramrattan is Instructor at the University of California, Berkeley, USA. He has served as an associate editor of The American Economist, and holds a PhD from the New School for Social Research, USA.
Michael Szenberg is Distinguished Professor of Economics and Chair of the Business and Economics Department at Touro College, USA. He is Distinguished Professor Emeritus of the Lubin School of Business at Pace University, USA. He is recipient of many awards, including the 2013 John R. Commons Award, and he served as the editor, Emeritus, of The American Economist (1973-2011).
Szenberg and Ramrattan have collaborated on journal articles, encyclopedia entries, and more than 18 books.