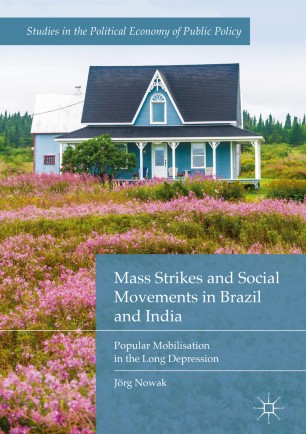 Mass Strikes and Social Movements in Brazil and India

Popular Mobilisation in the Long Depression

“Jörg Nowak has written an ambitious, wide-ranging and very important book. This impressive work may well become a major building block for a new interpretation of global workers’ struggles.”
—Marcel van der Linden, International Institute of Social History, The Netherlands
“In this timely and important study, Jörg Nowak examines the surge of worker-based mass strikes in developing countries between 2010-2014. He convincingly challenges the dominant Eurocentric approach to labour conflict and calls for a new theory of strikes.”
—Edward Webster, University of Witwatersrand, South Africa
This book explores new forms of popular organisation that emerged from strikes in India and Brazil between 2011 and 2014. Based on four case studies, the author traces the alliances and relations that strikers developed during their mobilisations with other popular actors such as students, indigenous peoples, and people displaced by dam projects. The study locates the mass strikes in Brazil’s construction industry and India’s automobile industry in a global conjuncture of protest movements, and develops a new theory of strikes that can take account of the manifold ways in which labour unrest is embedded in local communities and regional networks.
Jörg Nowak is Marie Sklodowska-Curie Fellow at the School of Politics and International Relations at University of Nottingham, UK. He works on South-South investment, labour unrest in emerging economies, Labour Geography and Althusserian Marxism.

Jörg Nowak is Marie Sklodowska-Curie Fellow at the School of Politics and International Relations at University of Nottingham, UK. He works on South-South investment, labour unrest in emerging economies, Labour Geography and Althusserian Marxism.h

“By investigating two strikes in the Brazilian construction industry and two strikes in the Indian automobile industry that took place between 2010-2014, and then identifying important findings from his comparison between both, Nowak produces an excellent account of these struggles and gives activists and scholars much to think about regarding contemporary struggles and studies of labor wherever it might be located.” (Class, Race and Corporate Power, Vol. 8 (1), 2020)
“The book is a major achievement and deserves to be read as widely as possible. It makes important conclusions about common problems of resurgent political authoritarianism and political crisis on the left. … this book helps us to understand both the strengths and the weaknesses of strike waves in recent times.” (Tom Barnes, Progress in Political Economy (PPE), ppesydney.net, May 29, 2019)
Buy options