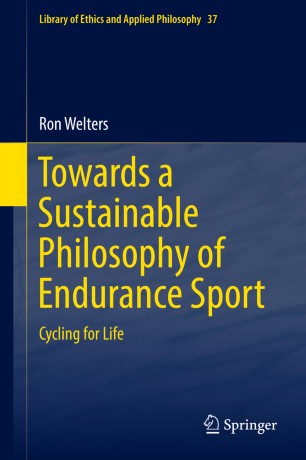 Towards a Sustainable Philosophy of Endurance Sport

Part of the Library of Ethics and Applied Philosophy book series (LOET, volume 37)

This book provides new perspectives on endurance sport and how it contributes to a  good and sustainable life in times of climate change, ecological disruption and inconvenient truths. It builds on a continental philosophical tradition, i.e. the philosophy of among others Peter Sloterdijk,  but also on “ecosophy” and American pragmatism to explore the idea of sport as a voluntary attempt to overcome unnecessary obstacles. Since ancient times, human beings have been involved in practices of the Self in order to work on themselves and improve themselves, for instance by strengthening their physical condition and performance through sport. In the contemporary world, millions of individuals engage in endurance sports such as running, swimming and cycling, to get or keep themselves in shape. This study focuses on the ethical dimension of long-distance sport, notably cycling, as a way to become better citizens, but also to contribute to a more sustainable society and healthier planet. Dominant world-views are challenged and an alternative vision is presented. Discourse analysis and conceptual analysis are combined with phenomenology and self-observations of a dedicated practitioner of endurance sport. This book is a great source for philosophers, sport philosophers, environmental philosophers, sport scientists,  policy makers, sport journalists, and endurance sport practitioners.

Ron Welters (1962) is a researcher at the Philosophy and Science Studies department of the Institute for Science in Society of Radboud University Nijmegen, The Netherlands. He is a non-delegate member of the executive board of the European Association for the Philosophy of Sport. He taught courses in the Philosophy of Sport, Food Ethics, Ethos of Science, Scientific Writing, Science & Media and Effective Communication in Biomedical Research. In the autumn of 2018 he defended his Phd-thesis entitled Cycling for Life.

Our planet is inhabited by humans  who are  relentlessly training themselves and optimising their condition. This may seem self-focussed, but it may as well have a broader scope: we train ourselves to become better citizens or to contribute to a just and sustainable society. The concept of training can assume many shapes. This monograph focuses on one particular dimension, namely endurance sport. The phenomenon of cycling has brought endurance sport within reach of the masses. The question is, how can cycling as an endurance sport contribute not only to self-knowledge, but also to self-improvement (on the individual level) and to sustainability (on the societal level)?

Ron Welters is a dedicated long distance cyclist and runner who aims to practice what he preaches: exploring physical challenges along the vertical axis of human existence and living a sustainable life.

‘For me, cycling represents a return to the primal human of the savannahs, who during a hunt spends the entire day running, and is constantly high in the process.’ (Peter Sloterdijk).