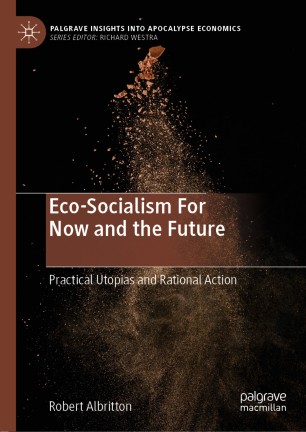 Eco-Socialism For Now and the Future

It is increasingly apparent that capitalism cannot stave off the truly frightening ecological disasters that threaten the future of life on earth. Is it an accident that the strongest and most capitalist economic force in the world, the US, is also that force that is most prone to the denial of the enormous dangers of global warming? While capitalism is a global force, it is not supported by the majority of the world, and much more thought and action is needed to integrate and globalize movements against oppression, injustice and ecological destruction.
While changes at a local level are important and more feasible in our current world, ultimately changes at a global level may have greater long-term importance, and we need to greatly expand theorizations and mobilizations in this direction now. Robert Albritton proposes 'practical utopias' as a process of thinking by which short-term changes tend in the direction of desirable changes in the long term.

“A relatively small but brilliant and timely book that focuses on what we need to do and stop doing in the near future.  It is compelling reading, advocating a post-capitalist and eco-socialist world.”  (Tony Lawson, Professor of Economics and Philosophy, Cambridge University, UK)

“This accessible book makes an impassioned, informed, and cumulatively devastating argument that capitalism’s profit orientation is behind many of the interconnected ills of a globally connected but increasingly divided global social order.  Anger alone being insufficient, the author proposes sensible solutions that offer some hope in these dark times.”  (Bob Jessop, Distinguished Professor of Sociology, Lancaster University, UK)

“Robert Albritton’s Eco-socialism for Now and  the Future: Practical Utopias and Rational Action unearths the toxic roots of current global capitalism, highlights the interconnectedness of the current global economic and ecological crises, but also shares a desperately needed vision for the sustenance of life on this planet.  Complex, but easy to read – sincere, but optimistic—and brave, when “everything is dangerous” (Foucault).” (Karin Schoenplug, Economist, Institute for Advanced Studies, Vienna, Austria)

“Discontent with “their lives” -- and a lost belief that the existing system can bring a better future -- are exploding throughout the world.  Humanity’s multi-century struggle against the dehumanization of capitalism has been abruptly expanded to include an ecological Armageddon. Rob Albritton’s Eco-socialism for Now and the Future makes valuable contributions to the unfolding social dialogue on the better world that is needed, starting today.” (Al Campbell, Professor (Lecturer) Emeritus, Economics Department, University of Utah, USA)

“Professor Emeritus Albritton has written a timely and fearless critique of capitalism and climate change and their intertwining to worsen the effects of each. These devastating impacts are all the worse for having been long predicted and potentially avoided. His writing is direct and credible, a compelling call to action.” (Ann E. Davis, Associate Professor of Economics, Marist College, USA)

“Eco-socialism for Now and the Future is a tour-de-force of engaged scholarship. Albritton has fashioned a highly accurate account of an impending catastrophe. This book deserves the widest readership.” (William Carroll, Professor of Sociology, University of Victoria, Canada)

“A major contemporary radical thinker, Albritton argues that the capitalist welfare state that existed due to the pressure of the working class has run its course, and that an economy based on profit-maximization cannot continue because of its inability to solve social problems and to meet the challenges of ecological sustainability.” (Raju Das, Professor in the Department of Geography, York University, Toronto, Canada)

“Rob Albritton has synthesized a crystal clear summary of Marx’s Capital, a critique of capitalist subjectivity, and a wide range of data on multiple global crises into a powerful argument for the need, now desperate, to save the planet and its inhabitants from the ravages of capitalism itself. This is what a sophisticated, class-conscious response to the threat of environmental catastrophe looks like.” (Ruth Groff, Associate Professor in the Department of Political Science, Saint Louis University, USA)