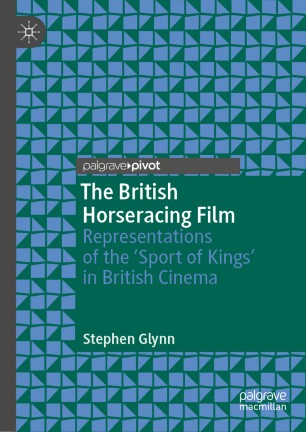 Representations of the ‘Sport of Kings’ in British Cinema

“Stephen Glynn has a thoroughbred pedigree in the field of sport in British cinema, and The British Horseracing Film is an odds-on favourite to be another winner. Written with verve and vigour, this gallop through a hitherto unknown subject is also good fun to read. I recommend all film and turf enthusiasts to take a punt.”
—James Chapman, Professor of Film Studies at the University of Leicester, UK, and editor of the Historical Journal of Film, Radio and Television
This book constitutes the first full volume dedicated to an academic analysis of horseracing in British cinema. Through comprehensive contextual histories of film production and reception, together with detailed textual analysis, this book explores the aesthetic and emotive power of the enduringly popular horseracing genre, its ideologically-inflected landscape and the ways in which horse owners and riders, bookmakers and punters have been represented on British screen. The films discussed span from the 1890s to the present day and include silent shorts, quota quickies and big-budget biopics. A work of social and film history, The British Horseracing Film demonstrates how the so-called “sport of kings” functions as an accessible institutional structure through which to explore cinematic discussions about the British nation—but also, and equally, national approaches to British cinema.

Stephen Glynn lectures in Film and Television at De Montfort University, UK. His previous genre studies for Palgrave include The British Football Film (2018) and The British School Film (2016).

This is a book written with real enthusiasm. It is accessible, detailed, consistently insightful and nuanced. It is particularly strong on the ways in which social class representations articulated with racing and local and national levels of British identity, but there is some sensible recognition of the ways in which women were portrayed. The complexities of gambling’s relationship with racing are all brought out well. Enthusiasts of sport, film, media and culture will learn much from this book.” (Mike Huggins, Sport in History, March 18, 2020)

“Comprehensive, well written and nicely illustrated, this book is a valuable addition to the scholarly literature on British cinema.” (Jeffrey Richards, Historical Journal of Film, Radio and Television, November 27, 2019)