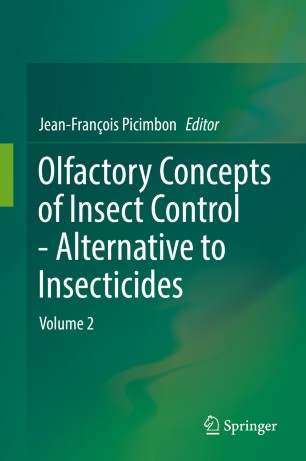 Most of all insect species respond to odor messages they exchange consciously. This is due to the existence of thousands of olfactory sensilla covering the antennal branches and thousands of nerve cells that will transmit the odor signal towards specific parts of the insect brain. Pheromones, pheromone regulatory pathways, pheromone-sensitive nerve cells, pheromone receptors and pheromone-binding proteins appear on this volume 2 as a prerequisite not only for fundamental knowledge in olfactory processes but also for applied research and insect control. The pheromone or olfactory concepts, exposed here in nocturnal species of moths, mainly deal with the phenomenal expansion of some specific insects, invasive pest species that have severe impacts on agriculture and/or human health. However, the olfactory concepts exposed on the whole book must be brought further, before the shrinkage of some other more beneficial species such as the honeybees. Like many other species (butterflies, crickets, ladybugs and other flying insects), the bees are disappearing or show signs of a fast and significant decline in hive population, as an example of the serious decline of flora and fauna due to our industrialized agriculture. In this no-choice situation, new concepts of pest control alternative to insecticides are required to stop the serious general disappearing of insects that are pollinators of flowers but also important ecological factors (e.g. as food sources or material converters). The present situation is very alarming for a nature at risk of losing a biodiversity and the ecological equilibrium that it has taken so long to build. We belong to the Quaternary (fourth) geological era, the “Age of Mammals”, the Cenozoic era of evolution that describes 60 My, from the birth of the flower and the bee to the modern days. In a close future, Men of the current time period, i.e the 21st century, may soon enter a new historical era, which may lead to its own extinction. Would this be the price to pay to preserve or rebuild those interactions so crucial for the life on earth?