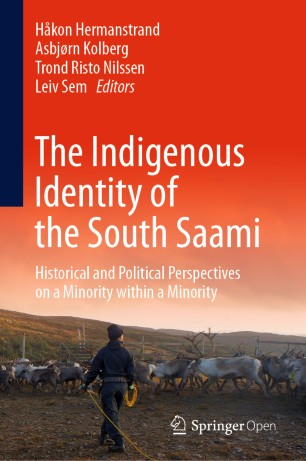 The Indigenous Identity of the South Saami

Historical and Political Perspectives on a Minority within a Minority

This open access book is a novel contribution in two ways: It is a multi-disciplinary examination of the indigenous South Saami people in Fennoscandia, a social and cultural group that often is overlooked as it is a minority within the Saami minority. Based on both historical material such as archaeological evidence, 20th century newspapers, and postcard motives as well as current sources such as ongoing land-right trials and recent works of historiography, the articles highlight the culture and living conditions of this indigenous group, mapping the negotiations of different identities through the interaction of Saami and non-Saami people through the ages. By illuminating this under-researched field, the volume also enriches the more general debate on global indigenous history, and sheds light on the construction of a Scandinavian identity and the limits of the welfare state and the myth of heterogeneity and equality.

Håkon Hermanstrand is a historian and PhD candidate at the Faculty of Teacher Education and Arts, Nord University. He has specialized in South Saami history and focused on developing and imparting knowledge about this field. He has worked at Saemien Sïjte, the South Saami museum, published articles and written a book on regional South Saami history. Currently he is working on his PhD thesis on Saami land use and land-lease contracts in the eighteenth century. Recently, he has been appointed by the Norwegian Parliament to a truth and reconciliation commission mandated to investigate injustice and forced assimilation suffered by the Saami and the Finnic ethnic minority in Norway.

Asbjørn Kolberg is an Associate Professor of Norwegian Language and Literature at the Faculty of Education and Arts, Nord University. He is currently serving as the Coordinator of Nord University’s new South and Lule Saami Teacher Education Programme. His research interests include children’s literature in a contemporary and historical perspective, critical text analysis, representations of indigenous people in literature and media and South Saami history and culture. In 2015 Kolberg was elected Honorary Fellow of the University of Latvia.

Trond Risto Nilssen is currently Associate Professor at Nord University, Faculty of Teacher Education and Arts, and at the Norwegian University of Science and Technology, Department of Teacher Education. He was awarded his PhD at the Norwegian University of Science and Technology. A historian, he has been working on Second World War subjects, the post-war settlement in Norway and the use of memorial sites in Europe (former Nazi camps). His latest research concentrates on political and historical perspectives related to the indigenous South Saami people of Norway.

Leiv Sem is a cultural historian and Associate Professor in Norwegian literature at the Faculty of Teacher Education and Arts, Nord University. He was awarded his PhD at the University of Oslo in 2010 with his thesis on the cultural memory of the Second World War in Norway. His other research interests include oral history, oral poetry and the history of literature. He has previously edited books on war commemoration culture in Europe and on Norwegian folkloristics. His most recent works focus on indigenous issues in the Norwegian cultural memory.