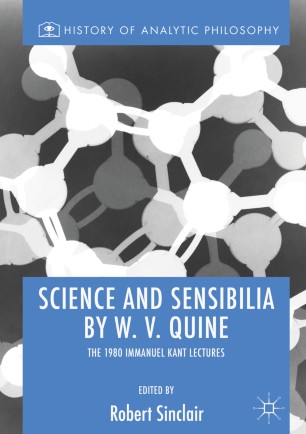 In this book, W. V. Quine’s Immanuel Kant Lectures entitled Science and Sensibilia are published for the first time in English.  These lectures represent an important stage in the development of Quine’s later thought, where he is more explicit about the importance of physicalist constraints in his account of the steps from sensory stimulation to scientific theory, and in further using them to assess the extent to which mental vocabulary is defensible.

Taken as a unit, these lectures fill an important gap in our understanding of his philosophical development from his 1973 work The Roots of Reference to his later work.  The volume further contains an introduction that outlines the content and philosophical significance of the lectures. In addition, several essays written by leading scholars of Quine’s philosophy provide further insight into the important issues raised in the lectures.

​Robert Sinclair is Professor of Philosophy in the Faculty of International Liberal Arts at Soka University, Tokyo, Japan. He is the author of several papers on Quine and Dewey. Currently he is working on a book manuscript that examines the influence of C.I. Lewis' conceptual pragmatism on Quine's early philosophical development.