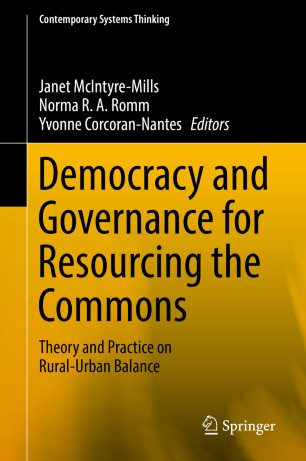 Democracy and Governance for Resourcing the Commons

Theory and Practice on Rural-Urban Balance

This book promotes the well-being of the commons through representation and accountability through monitoring from below in order to operationalize engagement. This book views the commons as a legal concept, a transformative governance concept, and a basis for systemic ethics. The chapters focus on practical responses to address complex problems that comprise many interrelated variables and are perceived differently by stakeholders with different values and life experiences. By considering these different stakeholders, the goal is to highlight ways to regenerate and invigorate employment opportunities. The book identifies pathways towards ethical vocational education to enable lifelong engagement by active citizens which requires action learning to address areas of perceived policy concern. Throughout the chapters in this book, the authors discuss transformative research and its implications on stakeholders. They focus on re-presentation and its implications for thinking and practice. One author makes the case for fostering non anthropocentric approaches to ethical development. In addition, the chapters cover case studies including governance challenges associated with water management using a mixed method approach and also production of mushrooms in collaboration with coffee growers in Jakarta. The book focuses on ways to de-colonialise knowledge formation in public policy and makes the case for an alternative approach to governance and democracy that takes into account a range of local people’s perspectives.

Janet McIntyre-Mills, Flinders University (nee Mills; publish as McIntyre-Mills) is Associate Professor at Flinders University, Honorary Professor at the University of South Africa in the College of Education, Training and Youth Development, an Adjunct Professor at the University of Indonesia. The adjunct appointments recognize over 30 years’ experience in policy research addressing complex social challenges.
Her research addresses social justice issues such as health, housing and social inclusion and the mitigation and adaptation to climate change. She addresses complex needs by exploring the meanings and ‘what if’ questions with diverse stakeholders. She has written several books including: ‘Systemic Governance and Accountability’, Springer and ‘User-centric Policy Design to address Complex Needs’. She is chair of the International Systems Special Integration Group, entitled: ‘Balancing individualism and Collectivism’ and in the past was elected three times to Research Committee 10 on Organizational Transformation of the International Sociological Association.
Her recent research addresses non anthropocentric policy for living systems. In 2017 her volumes for the Springer Contemporary Systems Series address the challenge to re-generate living systems. The sole authored volume is  entitled: ‘Planetary Passport for Representation, Accountability and Re-Generation  and the edited volume together with Professors Romm and Corcoran Nantes is entitled:  ‘Balancing Individualism and Collectivism: Social and Environmental Justice’. The latter comprises collected papers from the Special Integration Group for International Systems Sciences which McIntyre chairs together with 16 international contributors, including early career researchers. The research seeks a better balance across social, cultural, political, economic and environmental interspecies concerns to ensure a sustainable future for current and future generations. The ecological citizen uses a ‘planetary passport’ to track the distribution and redistribution of resources in the interests of social and environmental justice. Engagement links high level challenges with individual perspectives, facilitating nuanced investigation of the complex ethical challenge of closing the gap in life chances. The central argument looks for ways to hold the powerful to account so as to enable virtuous living by the majority in a ‘planetary passport’ that demonstrates a careful use of resources and a way to protect habitat for living systems.
Norma R. A. Romm (DLitt et Phil, Sociology) is Research Professor in the Department of Adult Basic Education and Youth Development, the University of South Africa. She is the author of The Methodologies of Positivism and Marxism (Macmillan, 1991), Accountability in Social Research (Springer, 2001), New Racism (Springer, 2010), Responsible Research Practice (2018, Springer), People’s Education in Theoretical Perspective (with V. McKay, Longman, 1992), Diversity Management (with R. Flood, Wiley, 1996), and Assessment of the Impact of HIV and AIDS in the Informal Economy of Zambia (with V. McKay, ILO, 2008). She has co-edited three books—Social Theory (with M. Sarakinsky, Heinemann, 1994), Critical Systems Thinking (with R. Flood, Plenum, 1996) and Balancing Individualism and Collectivism (with J. McIntyre-Mills and Y. Corcoran-Nantes) She has published more than 100 research articles on the contribution of research to social development, the way in which research can be practised accountably, Indigenous ways of knowing and living, and the facilitation of adult learning. She has worked on a range of projects aimed at increasing equity for organizations such as the ILO, ADEA, IOM, and UNESCO.
Yvonne Corcoran-Nantes is an Associate Professor in Flinders University and is widely known in the ﬁeld of gender studies wherein her research engages with some of the major issues facing women globally. Specialising in gender specific research in non-western countries in the field of development and international politics dealing with issues such as employment, agricultural development, popular grass roots politics, terrorism and conflict. She has worked as a consultant to most major INGOs such as UNESCAP, UNIFEM , UNDP & UNESCO in Central, East and Southeast Asia looking at the changing status of women in societies in transition. She undertook the first national surveys on the status of women in post-communist society in Central Asia and then Mongolia. The former led to the writing and publication of a seminal work on women in Central Asia entitled Lost Voices: Central Asian Women Confronting Transition which was published by Zed Books in 2006. She is a founding member of the UNESCO Asia Pacific Women’s and Gender Studies Network which was established in 2003. She has undertaken fieldwork research and consultancies in countries such as Brazil, Uzbekistan, Kazakhstan, Kyrgyzstan, Mongolia, Indonesia, Timor Leste and more latterly Vietnam undertaking a research project entitled - Vietnamese Women in the Crossfire – women resistance fighters, gender equality and the post conflict experience.
hihojo