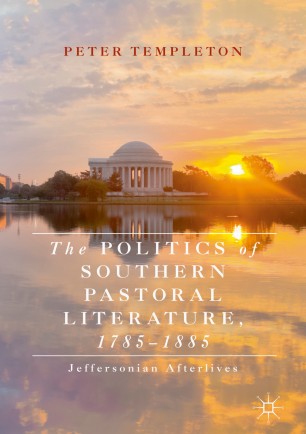 The Politics of Southern Pastoral Literature, 1785–1885

In The Politics of Southern Pastoral Literature, 1785–1885: Jeffersonian Afterlives, Peter Templeton presents a wide-ranging and systematic evaluation of pastoral in the nineteenth-century Southern novel, offering an explicit appraisal of the philosophical and political rationale of pastoral literature alongside the existing body of research into the image of Jefferson following his death. Rather than assuming a homogeneous South, Templeton locates Southern pastoral in its specific political context, offering readings of significant factors such as the literary representation of landscape, of class and the yeoman ideal, and the institution of slavery and its intellectual underpinnings. Focusing on a six key Southern authors, both canonical and relatively understudied, the book charts key transformations in the politics of pastoral literature in the period, and noteworthy reconfigurations in the representation of Jefferson and his philosophies, in order to analyze what these signified to nineteenth-century Americans. In doing so, the text also demonstrates how ideologies react to the stresses imposed on them by political realities.