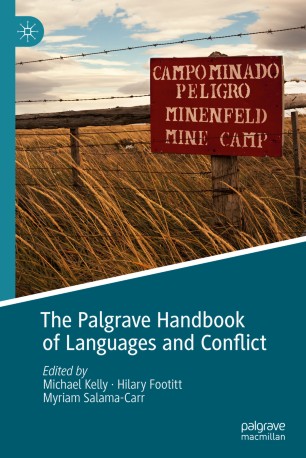 The Palgrave Handbook of Languages and Conflict

This Handbook maps the contours of an exciting and burgeoning interdisciplinary field concerned with the role of language and languages in situations of conflict. It explores conceptual approaches, sources of information that are available, and the institutions and actors that mediate language encounters. It examines case studies of the role that languages have played in specific conflicts, from colonial times through to the Middle East and Africa today. The contributors provide vibrant evidence to challenge the monolingual assumptions that have affected traditional views of war and conflict. They show that languages are woven into every aspect of the making of war and peace, and demonstrate how language shapes public policy and military strategy, setting frameworks and expectations. The Handbook's 22 chapters powerfully illustrate how the encounter between languages is integral to almost all conflicts, to every phase of military operations and to the lived experiences of those on the ground, who meet, work and fight with speakers of other languages. This comprehensive work will appeal to scholars from across the disciplines of linguistics, translation studies, history, and international relations; and provide fresh insights for a broad range of practitioners interested in understanding the role and implications of foreign languages in war.
Michael Kelly is Emeritus Professor of French at the University of Southampton, UK.
Hilary Footitt is Senior Research Fellow in the University of Reading, UK.
Myriam Salama-Carr is Honorary Research Fellow in Translation and Interpreting at the University of Manchester, UK.

​Michael Kelly is Emeritus Professor of French at the University of Southampton, UK, and Editor of the European Journal of Language Policy. He was co-author of Interpreting the Peace: Peace Operations, Conflict and Language in Bosnia-Herzegovina (2013).
Hilary Footitt is Senior Research Fellow in the University of Reading, UK. She was Principal Investigator for the AHRC project Languages at War, and co-author of WarTalk: Foreign Languages and the British War effort in Europe, 1940-47 (2013).
Myriam Salama-Carr is Honorary Research Fellow at the Centre for Translation and Intercultural Studies, University of Manchester, UK. She has published widely in the history of translation and was editor of Translating and Interpreting Conflict (2007).

“This volume is a valuable contribution to the literature on the subject and its inclusion in course curricula as a reference book would be commendable, not only for students of translation and interpreting but also for those in fields dealing with war studies, history, sociology of conflicts or security studies.” (Vedrana Čemerin, LSE Review of Books, blogs.lse.ac.uk, September 30, 2019)
Buy options