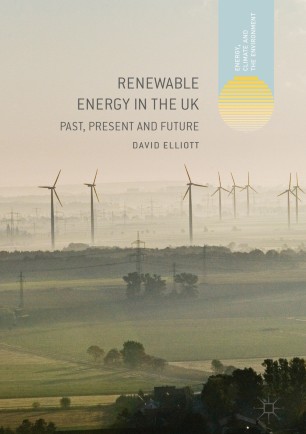 Renewable Energy in the UK

Past, Present and Future

Part of the Energy, Climate and the Environment book series (ECE)

This book offers a detailed account of how renewable energy has moved from the margins to the mainstream in the UK, and of the battles that have been fought to achieve this, trawling through the often troubled history of government involvement.
The book examines how renewables became what now seem likely to be the dominant energy sources of the future. Renewable energy technologies, using solar and wind power and other natural energy sources, are now supplying around 30% of UK electricity and appear set to continue expanding to supply around 50% within the next decade. Although the emphasis of the book is on the UK, developments there are compared with those in other countries to provide an overall assessment of the relevance of the UK experience.
Chapters explore why the UK still lags behind many other countries in deploying renewables, in part, it is argued, due to its continued reliance on nuclear power. The book ends with a discussion on what sort of changes may be expected over the coming years. The author does not assume a single answer, but invites readers to consider the possibilities.
David Elliott is Emeritus Professor of Technology Policy at the Open University, UK. He worked initially with the UK Atomic Energy Authority at Harwell and then for the Central Electricity Generating Board in Bristol, before moving, in the early 1970's, to the Open University, where he carried out research and developed courses on technological innovation, focusing in particular on renewable energy technology development policy. Professor Elliott has written extensively on sustainable energy policy and is co-editor of Palgrave Macmillan’s ‘Energy, Climate and Environment’ series, and also editor of the long established journal, Renew.