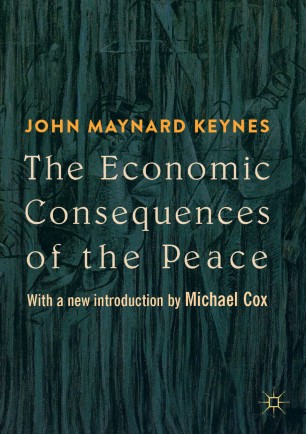 The Economic Consequences of the Peace

With a new introduction by Michael Cox

First published in December 1919, this global bestseller attacking those who had made the peace in Paris after the First World War, sparked immediate controversy. It also made John Maynard Keynes famous overnight and soon came to define how people around the world viewed the Versailles Peace Treaty. In Germany the book, which argued against reparations, was greeted with enthusiasm; in France with dismay; and in the US as ammunition that could be (and was) used against Woodrow Wilson in his ultimately unsuccessful bid to sell the League of Nations to an increasingly sceptical American public. Meanwhile in his own country the book provoked outrage amongst establishment critics – Keynes was even refused membership of the prestigious British Academy – while admirers  from Winston Churchill to the founders of the LSE, Sidney and Beatrice Webb, went on to  praise Keynes for his wisdom and  humanity. Keynes may have written what he thought was a reasoned critique of the economics of the peace settlement. In effect, he had penned a political bombshell whose key arguments are still being debated today. The Economic Consequences of the Peace is now reissued by Keynes’ publisher of choice with a new introduction from Michael Cox, one of the major figures in the field of International Relations today.  Scholarly yet engaged and readable, Cox’s introduction to the work – written a century after the  book first hit the headlines – critically appraises Keynes' polemic contextualising and bringing to life the text for a new  generation of scholars and students of IR, IPE, Politics and History. The original text and this authoritative introduction provide essential reading for anyone who wishes to understand the tragedy that was the twentieth century; why making peace with former enemies can be just as hard as winning a war against them; and how and why ideas really do matter.

John Maynard Keynes (1883-1946) has justifiably been called the most influential economist of the twentieth century. His behind the scenes account of what went on Paris in 1919 also marked him out as one of the greatest masters of the polemical form in the English language. A renaissance man who was just as much at home in the world of art and ballet as he was discussing probability theory and the history of economic thought, Keynes left an indelible mark on the world through his work as an economist, journalist, sponsor of the arts, and policy-maker in two wars.

Michael Cox is Director of LSE IDEAS and Professor Emeritus of International Relations at the London School of Economics. Over a long and distinguished career he has published work on the former USSR, the Cold War, US foreign policy and more recently on the reshaping of world order in the 21st  century. His work on E.H.Carr and Carr's The Twenty Years' Crisis has only confirmed his reputation as a scholar of international standing. He is currently working on a history of the London School of Economics entitled: The School: The LSE and the Shaping of the Modern World.