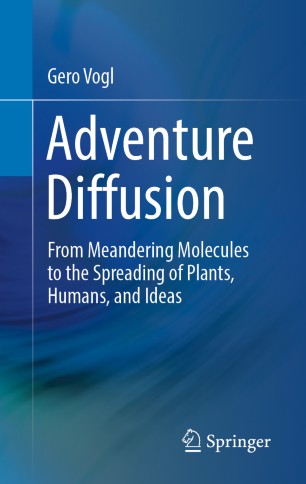 From Meandering Molecules to the Spreading of Plants, Humans, and Ideas

This easy-to read book looks at the many ways in which diffusion bears on processes that involve dispersion, starting from the Brownian motion of molecules, covering the invasion of exotic plants, migration of populations, epidemics, and extending to the spreading of languages and ideas.

Recently, there has been a growing interest in understanding migrations, diffusion and spreading outside the “hard” natural sciences of physics and chemistry, for example the spreading of plants introduced as a result of globalization. Another fascinating story is that of human migration in the distant past, i.e. the immigration of our ancestors who brought agriculture from the Near East, or the fast spread of the Palaeo-Indians into the Americas after the end of the Ice Age. Likewise, the spread of languages in the past, and even more so the current spread and retreat of languages will be described here in terms of diffusion. By understanding these principles, there is hope that some of the less common languages that are threatened by globalization can be saved. Another important implication discussed by the author concerns the outbreak of epidemics; these may be mitigated if we understand their spreading mechanism. Last but not least the spreading of ideas and innovations, a process which changes the world sometimes faster than we wish, can also be usefully described in this picture.