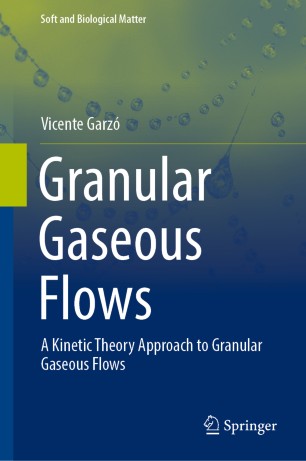 Part of the Soft and Biological Matter book series (SOBIMA)

This book addresses the study of the gaseous state of granular matter in the conditions of rapid flow caused by a violent and sustained excitation. In this regime, grains only touch each other during collisions and hence, kinetic theory is a very useful tool to study granular flows. The main difference with respect to ordinary or molecular fluids is that grains are macroscopic and so, their collisions are inelastic. Given the interest in the effects of collisional dissipation on granular media under rapid flow conditions, the emphasis of this book is on an idealized model (smooth inelastic hard spheres) that isolates this effect from other important properties of granular systems. In this simple model, the inelasticity of collisions is only accounted for by a (positive) constant coefficient of normal restitution.

The author of this monograph uses a kinetic theory description (which can be considered as a mesoscopic description between statistical mechanics and hydrodynamics) to study granular flows from a microscopic point of view. In particular, the inelastic version of the Boltzmann and Enskog kinetic equations is the starting point of the analysis. Conventional methods such as Chapman-Enskog expansion, Grad’s moment method and/or kinetic models are generalized to dissipative systems to get the forms of the transport coefficients and hydrodynamics. The knowledge of granular hydrodynamics opens up the possibility of understanding interesting problems such as the spontaneous formation of density clusters and velocity vortices in freely cooling flows and/or the lack of energy equipartition in granular mixtures.

Some of the topics covered in this monograph include:

He is a reputed specialist in kinetic theory. During the first years of his career, his research was mainly focused on the study of nonlinear transport properties using the Boltzmann kinetic equation and related kinetic models. These efforts were partially collected in a monograph co-authored with A. Santos (Kinetic Theory of Gases in Shear Flows: Nonlinear Transport) and published by Kluwer Academic Publishers in 2003. In the last eighteen years, he has extended his background in kinetic theory by applying this tool to the study of the so-called granular rapid flows (granular matter under rapid flow conditions), collaborating in some of the most important advances in the field. For instance, he has worked on the generalization of the Chapman-Enskog method and kinetic modeling to granular gases, the derivation of explicit forms for the Navier-Stokes transport coefficients for mono- and multicomponent systems, as well as several applications of kinetic theory (segregation, instabilities in undriven and driven granular systems,..) to granular flows. He has published  156 papers in regular international journals and has delivered 20 invited lectures in several conferences and workshops. He is now member of the editorial board of the international journal "Granular Matter".

Finally, he has also served as Reviewer in different external agencies [ANEP (Spain), AGAUR (Catalonia), NOW (Netherlands), FONDECYT (Chile), ANPCT (Argentina), FWO (Flanders), COST,…] and has been the Coordinator of ANECA (Spanish National Agency) for FPU Grants during the years 2012-2014 in the field "Physics and Space Sciences".