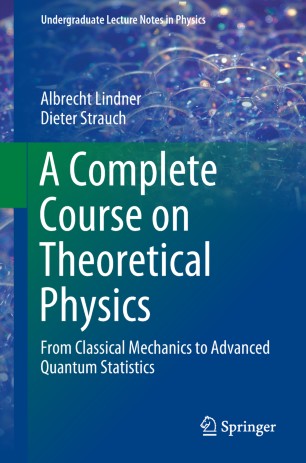 A Complete Course on Theoretical Physics

This textbook gives a basic introduction to theoretical physics. It deals with mechanics, electrodynamics, theory of relativity, quantum mechanics and statistical physics, thus covering all the standard disciplines of theoretical physics in a single volume. The material is presented in a concise style, enabling the reader to follow the central themes. Various excursions rarely found in other textbooks are designed to give deeper insight into interesting and current topics. A chapter on the mathematical background gives easy access to the other chapters and many exercises are included to support learning. The book is an ideal resource for advanced undergraduate and graduate students seeking to consolidate their knowledge.

Albrecht Lindner (1935-2005) received his PhD in 1962 and became a Professor in Hamburg, Germany in 1969. His main fields of expertise were theoretical nuclear physics – statistical theory of nuclear reactions, optical and collective models, isobaric analogue states, and reactions with polarized particles and/or three particles in the final channel – and laser physics (at DESY). He authored two books in German including the "Grundkurs Theoretische Physik".

Dieter Strauch (born 1940) received his PhD in 1968 and has been Professor at the University of Regensburg since 1974. His main fields of expertise are theoretical solid-state physics: model and density-functional calculation of phonon properties with applications to infrared absorption, Raman scattering, and phase transitions, as well as (also experimentally at the ILL and ESRF in Grenoble, France) inelastic neutron and synchrotron scattering.