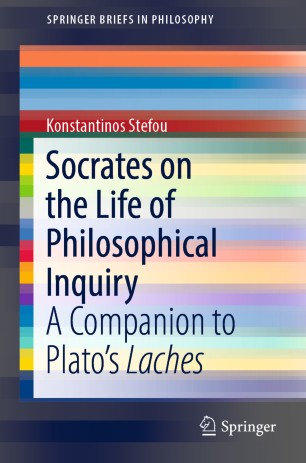 Socrates on the Life of Philosophical Inquiry

A Companion to Plato’s Laches

This book offers the first systematic reading of Plato’s Laches in English after three decades of scholarly silence. It rekindles interest in this much-neglected dialogue by providing a fresh discussion of the major issues that arise from the text. Among these issues, pride of place is taken by the virtue of courage, for the definition of which Socrates is depicted as engaging in some long-winded dialectical exchange with his interlocutors. Yet, although there is no room for doubt that the Laches is Plato’s most explicit treatment of courage, this dialogue ends in perplexity and is thus traditionally thought of as an unsuccessful attempt to define what courage is. The present study challenges this suggestion.

This book proposes a new paradigm for the interpretation of Plato’s Laches. In fact, it constitutes the first systematic attempt to study the dialogue in light of the idea that its composition could well have formed part of Plato’s overall plan to establish a well-defined and rigorous justification of the life of philosophical inquiry

The book will be of key interest to classicists, philosophers, and intellectual historians, but will also appeal to students or anyone interested in ancient Greek philosophy.

Konstantinos Stefou studied Classics and Ancient Philosophy at the University of Ioannina. In April 2014 he completed his PhD entitled ‘Early Greek Moral Values and Political Behavior in Plato’s Works’, after which he spent two years as a Postdoctoral Researcher at the same University. From 2016 to 2018 he served as a Postdoctoral Teaching Fellow at the Department of Classical Studies and Philosophy, University of Cyprus, and at the Department of History, Archaeology and Social Anthropology, University of Thessaly. He is currently a Visiting Research Fellow at the Philosophical Seminar of the University of Cologne, working on a project on Plato’s handling of medicine. He has authored a series of papers on the Platonic Socrates and the so-called ‘Socratic’ dialogues, and is currently co-editing an anthology of Roman poetry. His research interests include ancient Greek and Roman literature, philosophy, historiography, oratory and rhetoric, and medicine.