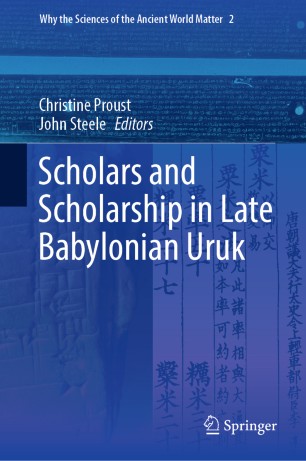 Part of the Why the Sciences of the Ancient World Matter book series (WSAWM, volume 2)

This volume explores how scholars wrote, preserved, circulated, and read knowledge in ancient Mesopotamia. It offers an exercise in micro-history that provides a case study for attempting to understand the relationship between scholars and scholarship during this time of great innovation.

The papers in this collection focus on tablets written in the city of Uruk in southern Babylonia. These archives come from two different scholarly contexts. One is a private residence inhabited during successive phases by two families of priests who were experts in ritual and medicine. The other is the most important temple in Uruk during the late Achemenid and Hellenistic periods. The contributors undertake detailed studies of this material to explore the scholarly practices of individuals, the connection between different scholarly genres, and the exchange of knowledge between scholars in the city and scholars in other parts of Babylonia and the Greek world.

In addition, this collection examines the archives in which the texts were found and the scribes who owned or wrote them. It also considers the interconnections between different genres of knowledge and the range of activities of individual scribes. In doing so, it answers questions of interest not only for the study of Babylonian scholarship but also for the study of ancient Mesopotamian textual culture more generally, and for the study of traditions of written knowledge in the ancient world.

Christine Proust is a Senior Researcher at the French Centre National de la Recherche Scientifique (Paris). Her primary focus is on the history of mathematics in the Ancient Near East, more specifically on mathematical cuneiform texts from different periods. She published Tablettes Mathématiques de Nippur (De Boccard, 2007) and she co-edited with Alain Bernard Scientific Sources and Teaching Contexts throughout History: Problems and Perspectives (Springer 2014), and with Alexander Jones and John Steele A Mathematician’s Journeys: Otto Neugebauer and Modern Transformations of Ancient Science (Springer, 2016).

John Steele is Professor of the History of the Exact Sciences in Antiquity at the Department of Egyptology and Assyriology, Brown University. His research focuses on the history of the astral sciences in Babylonia and related traditions. He is the author or editor of several books including most recently Rising Time Schemes in Babylonian Astronomy (Springer 2017) and The Circulation of Astronomical Knowledge in the Ancient World (Brill 2016).

“An impressive array of modern scholars seek to bring together the various strands of our current understanding of their Urukean counterparts. … This volume brings together a collection of modern scholars, each with their own areas of expertise, who together illustrate the breadth and intellectual interests of their predecessors from Late Babylonian Uruk.” (Duncan J. Melville, MAA Reviews, May 12, 2019)