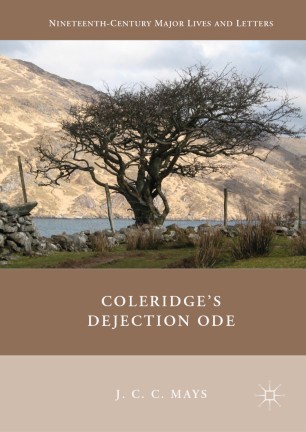 Coleridge's Dejection Ode completes J.C.C. Mays’ analysis of Coleridge’s poetry, following Coleridge’s Ancient Mariner (Palgrave 2016) and Coleridge’s Experimental Poetics (Palgrave 2013). "Dejection: An Ode" stands alone in Coleridge's oeuvre: written at a time of personal crisis, it reaches far back and deeply into his thinking in an attempt to find a poematic solution to ideas and problems he had mulled over for a long time. Mays reveals how the poem also marks the opening of the second half of Coleridge's career as both poet and thinker. In three central chapters Mays examines the new style that evolved in the process of writing the Ode: the technical means of metrics, rhyme and grammar; language and allusion; and symbol and structure. He recounts the complex, sometimes controversial critical history of the Ode, and suggests an editorial solution to the problem created by the Letter to Sara Hutchinson; re-evaluates the position of Wordsworth in the poem apropos the political statement it makes; clarifies the distinction between the views on Imagination expressed and those contained in Biographia Literaria; and traces the links of the concept "dejection" as it underpins Coleridge's late poems.