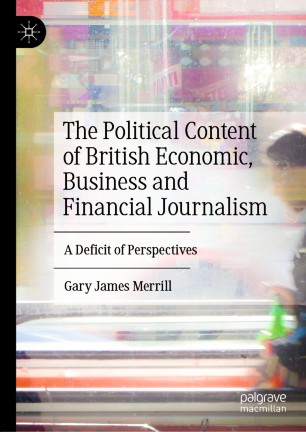 The Political Content of British Economic, Business and Financial Journalism

A Deficit of Perspectives

This book assesses the extent to which British news organizations gave exposure and credence to different political interpretations of economics and business news in the decade before the 2008 Financial Crisis. Through the content analysis of some 1,600 news items, this study provides compelling empirical evidence to inform often theoretical debates about neoliberal assumptions in the media. In each of the three pre-2008 case studies – economic globalization, private finance and public services, and Tesco – Merrill finds that the Telegraph, The Times, the Sunday Times and, to varying extents, the Guardian-Observer and the BBC gave limited exposure and credence to ideas from the left of the political spectrum. As such, he builds an important comparative picture of economic, business and financial journalism in the period before the defining event of the decade, the effects of which continue to resonate.

Gary James Merrill is Senior Lecturer at the University of Roehampton, UK. As a journalist, he has written for the Daily Telegraph, the Independent and the Guardian.

​“This is an extremely important and highly revelatory work which deserves to be considered alongside the output of the Glasgow University Media Group.” (Professor Julian Petley, Brunel University London, UK)
“This is an important study which shows how neoliberalism captured much of the British media’s coverage of globalisation and economic affairs in the lead-up to the 2008 Financial Crash. It helps to explain how we sleepwalked into economic calamity.” (Professor James Curran, Goldsmiths, University of London, UK)
“This book is essential for anybody who wants to understand the history, dynamics and contours of economic, business and financial journalism. The focus is the UK, but the implications and findings are paramount: we all need to take heed and listen.” (Sophie Knowles, Middlesex University London, UK)
“There can be few issues more important than the workings of the economy and the power of business and finance. Yet this detailed, empirical investigation reveals a dearth of informed democratic debate around this key area of public policy going back well before the Financial Crisis of 2008.” (Tom Mills, Aston University, UK)
Buy options