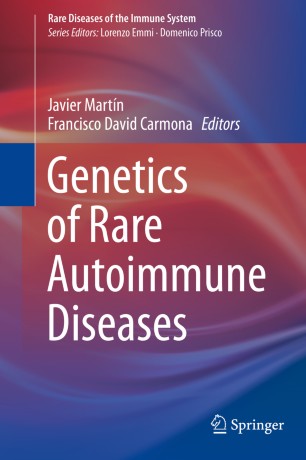 The main aim of this volume is to provide an updated overview of the genetic basis of a group of complex disorders that are considered rare individually, but show a relatively high prevalence on the whole in developed countries: the rare autoimmune diseases. These are chronic disorders that involve long and expensive treatments with considerable side effects that may dramatically reduce the quality of life of affected people. Therefore, shedding light into their pathologic mechanisms is a major concern given their growing social and economic awareness and impact.

General sections include different chapters on single entities as systemic lupus and sclerosis, Behçet’s disease, Sjogren’s syndrome and polymiositis, and sections devoted to autoimmune vasculitis, hepatic autoimmune conditions, as well as those affecting the nervous system, and a concluding chapter in which the shared predisposition amongst all diseases is discussed. All the chapters are given a homogeneous scheme in which the authors explain the clinical singularities of every disease and report the recent breakthrough discoveries related to them, giving a critical interpretation and suggesting future perspectives. All contributors are renowned researchers with high expertise in each disease. Due to the exponential increase in our understanding of the genetic causes of these complex diseases, a major advance in biomedical discovery is taking place. However, most of the achievements in this field are very recent and there is a lack of bibliography gathering them together. This book is thus filling a gap and will prove a useful companion to clinicians in the first place (internists, rheumatologists, clinical immunologists, and hematologists) but also to basic and applied researchers.

Javier Martin is Professor of Human Genetics at the Instituto de Parasitologia y Biomedicina, Spanish National Research Council (CSIC) belonging to the Spanish Ministry of Science and Innovation. He trained at the Medical School, University of Granada (1996-1982), PhD in Immunology, Department of Immunology Hospital Virgen de las Nieves Granada (1983-1987) and Postdoctoral training, Dpt. Immunology, Mayo Clinic, Rochester, MN,USA (1987-1990).  His research interest is the study of the genetic basis of complex traits and common diseases, with a special focus on human autoimmune diseases with rheumatic component.  We aim at identifying novel disease loci and provide functional and clinical relevance for Systemic Sclerosis, Rheumatoid Arthritis and Giant Cell Arteritis through genome-wide association studies (GWAS) and next generation sequencing (NGS) approaches. He is the author of more than 500 scientific publications, and Principal Investigator of 25 national and international grants.

F. David Carmona is a "Ramón y Cajal" researcher of the Department of Genetics and the Institute of Biotechnology of the University of Granada, Spain. Although his scientific career has been relatively multidisciplinary, Genetics has been always a common topic in his research. He obtained his PhD at the Department of Genetics of the University of Granada. Afterwards, he did a first postdoc in the "Institute of Medical Sciences" of the University of Aberdeen (UK). From 2010 to 2016, he worked at the "Institute of Parasitology and Biomedicine López-Neyra" (CSIC, Spain) in Javier Martin's group. He was mostly motivated by the study of the genetic basis of complex diseases, especially vasculitides. In this regard, he was directly involved in the recent publications of the two first large-scale genetic analyses on giant cell arteritis. Currently, he is PI of a research grant of the Spanish Ministry of Science and Innovation aimed at unravelling the genetic component of non-obstructive azoospermia. He has published more than 50 papers in JRC journals.