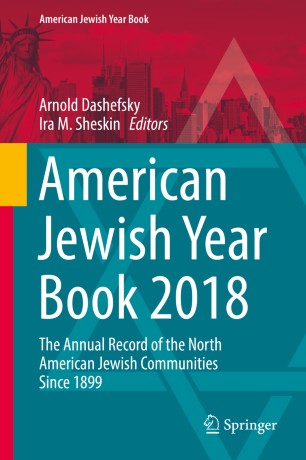 The Annual Record of the North American Jewish Communities Since 1899

The American Jewish Year Book, now in its 118th year, is the annual record of the North American Jewish communities and provides insight into their major trends. The first two chapters of Part I include a special forum on "Contemporary American Jewry: Grounds for Optimism or Pessimism?" with assessments from more than 20 experts in the field. The third chapter examines antisemitism in Contemporary America. Chapters on “The Domestic Arena”  and “The International Arena” analyze the year’s events as they affect American Jewish communal and political affairs. Three chapters analyze the demography and geography of the US, Canada, and world Jewish populations. Part II provides lists of Jewish institutions, including federations, community centers, social service agencies, national organizations, synagogues, Hillels, day schools, camps, museums, and Israeli consulates. The final chapters present national and local Jewish periodicals and broadcast media; academic resources, including Jewish Studies programs, books, journals, articles, websites, and research libraries; and lists of major events in the past year, Jewish honorees, and obituaries.

Today, as it has for over a century, the American Jewish Year Book remains the single most useful source of information and analysis on Jewish demography, social and political trends, culture, and religion. For anyone interested in Jewish life, it is simply indispensable.

The American Jewish Year Book stands as an unparalleled resource for scholars, policy makers, Jewish community professionals and thought leaders. This authoritative and comprehensive compendium of facts and figures, trends and key issues, observations and essays, is the essential guide to contemporary American Jewish life in all its dynamic multi-dimensionality.

Arnold Dashefsky, Ph.D. served as the inaugural holder of the Doris and Simon Konover Chair of Judaic Studies and professor of sociology at the University of Connecticut in Storrs, where he is now emeritus. He is the co-author or editor of thirteen books, including Americans Abroad, Charitable Choices, Ethnic Identification Among American Jews, among others, as well as numerous scholarly articles. A former associate head of the sociology department, he was the founding director of the Center for Judaic Studies and Contemporary Jewish Life, located in the Thomas J. Dodd Research Center at the University of Connecticut, and is the director emeritus and current senior academic consultant of the Berman Jewish DataBank.

Ira M. Sheskin, Ph.D. is the director of the Jewish Demography Project of the Sue and Leonard Miller Center for Contemporary Judaic Studies at the University of Miami and professor of geography at the same institution. He has completed more than 50 major Jewish community studies for Jewish Federations throughout the country and was a member of the National Technical Advisory Committee of the Jewish Federations of North America from 1988 to 2003, which completed both the 1990 and 2000-01 National Jewish Population Surveys. His publications include books entitled Survey Research for Geographers, How Jewish Communities Differ, and Comparisons of Jewish Communities: A Compendium of Tables and Bar Charts.