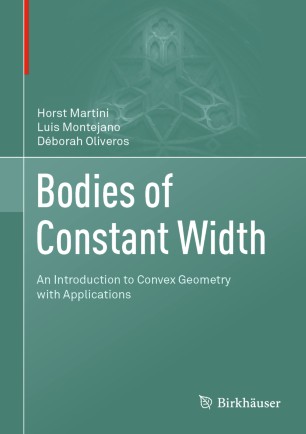 An Introduction to Convex Geometry with Applications

This is the first comprehensive monograph to thoroughly investigate constant width bodies, which is a classic area of interest within convex geometry. It examines bodies of constant width from several points of view, and, in doing so, shows surprising connections between various areas of mathematics. Concise explanations and detailed proofs demonstrate the many interesting properties and applications of these bodies. Numerous instructive diagrams are provided throughout to illustrate these concepts.
An introduction to convexity theory is first provided, and the basic properties of constant width bodies are then presented. The book then delves into a number of related topics, which include
Bodies of Constant Width: An Introduction to Convex Geometry with Applications will be a valuable resource for graduate and advanced undergraduate students studying convex geometry and related fields. Additionally, it will appeal to any mathematicians with a general interest in geometry.

Horst Martini obtained his PhD in Dresden/Germany (1984) and defended his habilitation at the Schiller University in Jena (1988). Since 1993 he is Full Professor for Mathematics at the University of Technology in Chemnitz, Germany (Chair of Geometry). He received a von Humboldt Scholarship in 1990, and an honorary professorship from the Harbin University of Science and Technology (China) in 2015. His main mathematical interests are focused on convex and discrete geometry, the geometry of finite dimensional real Banach spaces, and combinatorics.
Luis Montejano had graduate studies at MIT and the University of Utah, and he received his PhD in 1980. As a postdoc, he was member of the Institute for Advanced Studies, Princeton, and in 1990 he obtained a von Humboldt Scholarship in Heidelberg. He is Professor at the National University of Mexico, Campus Querétaro. His main mathematical interests refer to applications of topology to discrete and convex geometry.
Deborah Oliveros studied mathematics at the National University of Mexico UNAM, and she obtained her PhD in 1997. After that she got a postdoctoral position at the University of Calgary, Canada, where she stayed for several years. She is now Professor at the National University of Mexico, Campus Juriquilla, and her main mathematical interests are convex and abstract polytopes, discrete geometry, and convexity.